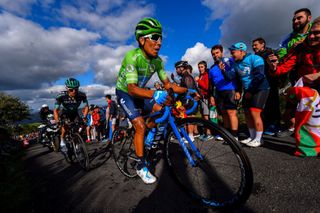 When Nairo Quintana leaves his team hotel lobby every morning this week in Calpe, Spain, a left turn brings him to a vast deployment of team vehicles currently hogging almost all the spots in a fenced-off car park, among them the truck for his new squad for 2020, Arkea-Samsic.

And if the Colombian turns right? As chance would have it, Quintana would then find himself on exactly the same broad boulevard where he broke away for a stunning Vuelta a España stage victory for Movistar just a few months ago. It’s also the same road down which Quintana, clad in the red jersey of Vuelta leader, tackled the closing kilometre of a very technical 2016 time trial.

For cyclists, the road is often a metaphor for life, one direction indicating the past, another a new direction in life.

“In 2016 the time trial was the last obstacle en route to victory,” Quintana tells Cyclingnews during Arkea-Samsic’s training camp this December “and this was where I took my most recent win as well.

“So they’re good memories to have, unforgettable ones, and it’s nice to be back here, but now I have to look ahead.”

Movistar, as it happens, are holding their pre-season training camp in the same hotel. As a result, Quintana is wearing normal civilian clothing, capped with an enormous baseball cap, for interviews, and his Movistar kit in training.

It means that Quintana’s blue-clad figure is still indistinguishable from his former Movistar teammates every time a group of riders – there are no less than eight squads in this particular hotel – merge during training rides or crowd into the hotel lifts.

But not for long. December 31 and so the end of Quintana's Movistar contract, is a bare two weeks away. On January 1, 2020, the division between the Colombian’s past and future will broaden much more noticeably.

Nairo Quintana falls off the pace in the Vuelta a España

Nobody could disagree that 2020 marks a key turning point for Quintana, given Movistar was Quintana’s team for the last eight years and in which he’s had almost all his major international triumphs.

Barring a couple of footnotes that chapter is effectively over, and Quintana says he’s fully focused on the challenges to come with his new squad.

“Things are going well, this is the team’s second training camp, and I’m in a team which is growing well and fast, because it wants to step up in 2020 and we’re aiming to form part of the WorldTour,” Quintana observes.

“Fortunately, we’ve got some very important invitations [to races] lined up, which gives me a certain degree of calm when it comes to focusing on training and above all helps me look forward to the objectives I’ve got for the season.

“And we’ve got a good team, one that will allow us to fight for the races we take part in or at the very least for a podium place without any problems.”

Arkea-Samsic’s radical makeover will see a raft of major talent signed to back up Quintana on the climbing stages. This includes his brother Dayer, who raced for Neri Sottoli in 2019 and loyal mountain domestique Winner Anacona, who won the Vuelta a San Juan and also joins from Movistar.

“Having Dayer on the team is good for me, on and off the bike, because having somebody from my family on the team matters to me a lot - and he’s also going to be a key team player. And Winner has always been there in those important moments when you need back-up, and it’s great to be able to count on him again in the days to come,” Quintana explains.

Quintana admits that it is odd to be in the same hotel as Movistar for this training camp “because I was always happy there, but there are lots of teams out there, and I feel like I’m integrating well with my new squad and new teammates.”

The Colombian’s race program is decided for at least the first half of 2020.

It kicks off with the Colombian National Championships – both road and time trial – in the new year and then sees him head to Europe for a series of stage races.

“It’s a French team, so I’m adapting to a much more French-centred calendar than before,” Quintana says.

“That means no Colombia 2.1 or racing in Argentina, but I’ve done well in a lot of French races in the past, so I’m looking forward to doing that - Tour de la Provence, Haut Var and Paris-Nice… Then I’ll go to Catalunya.”

Quintana will return, too, to the Ardennes Classics, before returning to Colombia in May for around a month and then building up for the Tour in the Criterium du Dauphiné, “which is the ideal final race for me for July.”

It was also, Quintana recalls, where he took a breakthrough stage win in 2012 after attacking on the Joux-Plane, despite the previously all-conquering Team Sky’s best efforts to pull him back.

As for how he and Arkea-Samsic co-leader Warren Barguil will handle the Tour, Quintana says he’s not anticipating any problems.

“It’ll be fine, the idea is to help each other and go for the best result possible. We’ve deliberately structured the program so that we’re racing a lot together through the first part of the year, so there’s plenty of time to get to know each other.”

Although there is understandably a major focus on the Tour de France, Quintana has not forgotten the Olympic Games, which, being on a mountainous course, could favour him enormously.

“There’s definitely a chance I’ll do them, together with the Colombian National Federation we’re working out how I can take part in the best shape possible, using the form I’ll get in the Tour. A lot of Colombian riders want to do it, so I’ll have to be in good form, but some of us will be there to help and others to lead.”

While Quintana in Colombian National team kit in Japan would be a familiar sight, seeing him in Arkea-Samsic colours after so long with Movistar will be harder to get used to.

However Quintana knows, too, that after such a major change, the next developments in his career will be followed even more keenly than usual by his Colombian cycling fanbase, meaning that very soon, turning right out of his hotel lobby and re-living his past victories will not be an option.