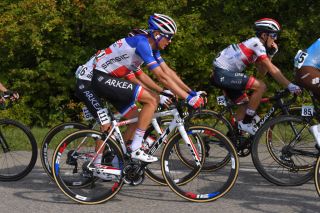 Warren Barguil and his new 2020 Arkéa-Samsic teammate Nairo Quintana are set to race together at a number of races next spring, as both riders build for the Tour de France.

According to L'Equipe, both riders' provisional programmes include the Tour de La Provence (February 13-16), Paris-Nice (March 8-15), the Volta a Catalunya (March 23-29), Amstel Gold (April 19), Flèche Wallonne (April 22) and Liège-Bastogne-Liège (April 26), giving the team's two leaders plenty of opportunities to get to know one another.

Additionally, Quintana will race the national championships road race and time trial at home in Colombia, from January 30-February 2, and the Tour du Var et des Alpes-Maritimes (February 20-23). He also wanted to race the Tour Colombia (February 11-16), said L'Equipe, but will miss the race due to a French-race-heavy programme for his French sponsors.

French road race champion Barguil is also due to race the Ardèche Classic on February 29 and the Drôme Classic on March 1.

Both riders are very likely to ride the Tour, which this year starts early, on June 27 – in Nice – due to the Olympic Games.

Beyond Liège at the end of April, and following a likely break, the new teammates are likely to ride either the Critérium du Dauphiné or the Tour de Suisse, with both riders having opted for the former in 2019. Barguil will also probably attempt to defend his national title the week before the start of the Tour.

Quintana joins the French Pro Continental team following eight seasons with Spanish WorldTour outfit Movistar, and recently said that he's expecting a good working relationship with Barguil, who's been at the team since joining from Sunweb at the start of the 2018 season.

"I am convinced that my arrival in the team will bring him a little more tranquility since the responsibilities will now be shared," Quintana told French newspaper Le Telegramme earlier this week. "I'm sure it's going to be fine between us."