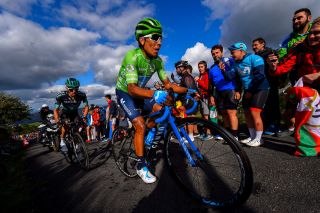 After his stunning first week in the Vuelta a España, Nairo Quintana (Movistar) continues to ship time to the other GC favourites, with another big blow to his overall ambitions coming on the Alto de Acebo on stage 15.

The winner of stage 2 and race leader after Andorra was unable to follow teammate Alejandro Valverde when the world champion attacked and Primoz Roglic (Jumbo-Visma) responded.

But worse was to come when Quintana was shed from the group containing Tadej Pogacar (UAE Team Emirates) and Miguel Angel Lopez (Astana Pro Team), third and fourth overall, losing 55 seconds to his Slovenian and Colombian rivals.

Quintana remains in fifth, but after losing the lead in the Pau time trial and then being put under pressure by Pogacar and Roglic on Los Machucos on stage 13, his chances of fighting for the podium, let alone the overall victory, look increasingly remote.

“Let’s not cry about it, today wasn’t my day and you can’t do anything about that. I wasn’t well, I could tell I was tired,” Quintana, now 5:09 down on Roglic, told reporters afterwards.

The Colombian put the blame on a long season and accumulated fatigue.

“It’s what tends to happen at this point in the season when you’ve been going flat out since January,” Quintana, who started racing in the Vuelta a San Juan insisted.

Quintana had been talking after Los Machucos about making long range attacks to try and get back into contention, but as he pointed out, “today would have been difficult to do, we had [teammate] Marc Soler in the break and that made it complicated.

“But tomorrow’s another day and anything can happen. And if something happens and I can try to go for it, I will.”