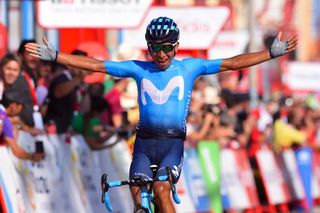 Nairo Quintana believes that he and Warren Barguil will have no problems working together after the Colombian joined Arkea-Samsic from Movistar.

Quintana, 29, left Movistar to find a fresh challenge and rid himself of the constant battles for Grand Tour leadership that took place between him, Mikel Landa and Alejandro Valverde. However, at Arkea-Samsic he finds himself riding alongside Barguil, who finished just two places behind him in this year’s Tour de France. That fact, coupled with Barguil’s reputation as a Grand Tour leader in his own right, has raised questions regarding the possible relationship between the Frenchman and the team’s new GC recruit.

However, according to Quintana, who has won two Grand Tours and finished fourth in the 2019 Vuelta a Espana, the pair can find the right combination to deliver success for the team.

“I am convinced that my arrival in the team will bring him a little more tranquility since the responsibilities will now be shared. I'm sure it's going to be fine between us.”

Quintana’s move to Arkea raised eyebrows because, despite a recent drought in Grand Tour wins, he had established himself as one of the best stage racers in the world during his time at Movistar. He won the Giro d’Italia in 2014 and followed that with the 2016 Vuelta a Espana title. However, his GC bids in the Tour de France have faded in recent years, and although he won stages in back-to-back Tours, he believes that a change of environment was essential.

“Some have understood my choice, others have not. Too bad,” he said.

“I come here with a lot of joy, a smile, and motivation. Now, I had never imagined that I would wear the colors of a French team one day, but Yvon Ledanois is one of my former sports directors. Together we won a lot of races. He contacted me in the spring, and then he introduced me to Emmanuel Hubert. He convinced me to join his team. The way he introduced me to things brought me a lot of serenity.”

At Movistar, “I was not particularly unhappy but I was not very happy either," Quintana said.

“These are things that happen in life. At some point, you have to open your eyes and look ahead. That's what made me leave Movistar, where I had spent eight years. I was looking for a new challenge. I have a lot of desire.”

Next season, Quintana will build his entire campaign around the Tour de France as he bids to become Colombia’s second winner after Egan Bernal (Team Ineos) won in 2019.

“The Tour de France will be my number-one goal. I'll aim for a place on the podium. I know I have the capacity. I will still have a good team around me, so I'll try again to win it. I think that it's possible,” he said.

“Apart from the Tour, I want to shine in all the French races. I will also race more often in France next season; I'm part of a French team now. After the Tour de France, I hope to continue with the Olympic Games. It would be a moment of pride to represent my country in Tokyo.”

Quintana will also target Paris-Nice in the spring, while his first race in his new colours will come at the Colombian national championships at the start of the year.