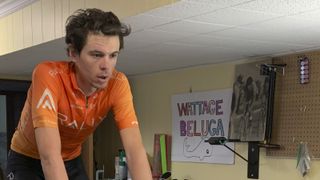 The professional peloton has been relegated to racing in the virtual realm as the coronavirus pandemic has shuttered all real-world races and events such as the Digital Swiss 5 on Rouvy, the Zwift Tour for All and the virtual Tour of Flanders on BKool have helped fill the void a little bit. They've also shown that relatively unknown riders can put out some huge watts. Rally Cycling's Matteo Dal-Cin impressed with a fifth place in race 2 of the Digital Swiss 5 and gave Cyclingnews some of his secrets for going pedal-stroke to pedal-stroke against the top riders in the WorldTour.

Dal-Cin, who lives in Canada's capital city, Ottawa, would normally be in Girona and racing events such as the Vuelta a la Comunidad Madrid. But after starting the season with the Saudi Tour and a handful of other races, the 29-year-old returned home to renew his visa then fly back to Spain and race until his national championships. That all changed when, two days after toting two huge suitcases back to Europe, the US imposed travel restrictions and his team suggested he might want to head home.

Now, back in his new house in Ottawa until at least August, Dal-Cin has been mixing up dodging rainstorms training in the unpredictable Ontario weather with indoor cycling. For his forays into the virtual racing world, he relies upon the expertise of his father Carlo - an avid Zwifter and general contractor who is responsible for one of the key features of Matteo Dal-Cin's pain cave: a custom-built rocker plate.

"My dad rides every day but he has a very narrow window of temperatures he'll ride in, so he's an avid Zwifter. It was his idea to do the plate," Dal-Cin tells Cyclingnews.

Combatting the fatigue of being locked into one position is key to both efficiency and comfort in indoor training and there are numerous internet groups that share designs to build devices that help you simulate the side-to-side movement of outdoor riding on the trainer. They're called rocker plates - platforms upon which you mount a trainer that allow a slight rocking motion - and come in two designs, one that has a stationary front wheel and only rock under the trainer and whole bike platforms that allow a more organic movement of the entire setup.

It's a system that has been commercialised by indoor cycling brand, Saris, with its MP1 Nfinity training platform.

Dal-Cin says he's tried both designs and prefers the whole-bike platform that is currently in his pain cave.

"My dad built the first design with just the back plate and I rode it a few times - it was really nice. But then he was looking at getting the Wahoo KICKR Climb - and the rear rocker wasn't compatible with that so he found a different design and made some edits," Dal-Cin explained.

"He got some tips from a Facebook page called Rocker Plates and adapted some of it. It was built in the garage albeit with lots of tools since he's got them from construction.

"It's basically two boards supported on castors down the middle with a wheelbarrow inner tube secured on each side to provide the rebound side to side. It's off-balance because the trainer freewheel is heavy so you need to balance it with something so you're neutral when you sit on the bike but I don't know if there's a workaround for that since all the trainers weigh a little different."

The effort to find the perfect balance - which ended up being two weight plates strapped to one side of the platform - was worth it.

"I like the new one better - it's never going to feel like the road and it took a little getting used to but it's much better for fatigue. Whereas before an hour and a half or two-hour ride on the trainer would hurt, now a three-hour ride isn't bad. You still get sweaty and dehydrated from not having air moving over you but you're not taking a beating."

Dal-Cin credits the plate with allowing him to push more power out of the saddle but adds a caveat to the virtual racing results.

"There are so many variables in a setup - it's good to have direct-drive [the chain of the bike on a cassette on the smart trainer rather than a wheel-on trainer -ed] - but there are a lot of different systems. You saw that on the last Zwift Tour for All stage with Adam Yates who was at altitude. Normally he would just be rocketing away on a climb, but the altitude makes a huge difference."

For some virtual races, he says organisers asked them to use the power meter on their bike for the in-race values rather than the smart trainer, so he hooked up his Quarq power meter to the system but he says the two give similar values.

"Normally I use the trainer for resistance and measurement but I ran a side by side with the Quarq to make sure they were close for my training peaks so it wouldn't mess up zones for outdoor training."

Other key features of Dal-Cin's pain cave are a window to let in fresh air and a fan to help with cooling. "Having the window open to get fresh air makes a big difference," he says. "It feels more like riding outside."

Dal-Cin uses two fans: one to blow air on himself and another to keep the heat sink on his Wahoo KICKR from overheating. "I had some problems when I was pushing big watts where the heat sink got hot to the touch and it seemed like the power topped out at 500 watts and I couldn't make it go any higher. Putting a fan on it seems to have solved it, at least I haven't had that happen since I started using it."

During Digital Swiss 5, he says the team wanted him to wear the jersey for their sponsors but not long into the ride he had to unzip.

"I had my phone set up as the camera for the broadcast feed and kind of forgot it was there - when you're doing an effort like that all composure is gone pretty fast. Then my uncle's friend from France says he saw me and it's like - oh! people were really watching?"

Dal-Cin hooks up his laptop to a television in his laundry room/workshop/pain cave when riding Zwift and says it is much nicer than squinting at a small screen.

"The text on the computer is so small - the bigger screen is better for racing because you can see what efforts the other riders are doing instead of trying to judge from what their avatars are doing."

More motivation comes in the form of a curious sign mounted to the wall in Dal-Cin's pain cave. It says "WATTAGE BELUGA".

Dal-Cin isn't quite sure where the phrase originated, but he says it became a joke on his local Tuesday night group ride. "Maybe it started with wattage bazooka and someone mispronounced it or something like that, but it turned into a saying. Then when I was in the breakaway at the Grand Prix de Montréal I saw someone holding that sign and I laughed and pointed to it. I knew it must be someone from Ottawa. After the race, I found him and said I had to have it, and he gave it to me."

Being a wattage beluga - Dal-Cin is 6'5" (1.96m) tall - helped when it came to racing on the Rouvy platform that doesn't allow drafting like Zwift. In Digital Swiss, he found himself chasing between Greg Van Avermaet and Michael Schär, grinding out over 6W/Kg at times.

"The trainer is a little weird - outside you do a little effort and make the front group but on Rouvy it was like a time trial where you can see all of your opponents.

"We're making the best of it - I'm just glad to be able to get some of the competitive urges out." His form, he said, is just on maintenance at the moment. "I feel like you can do efforts of 60 to 90 minutes like that with decent form, but to do that after four or five hours of racing? You can't fake that endurance."