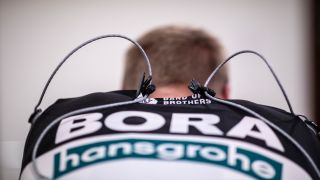 There are plenty of differences between the average professional cyclist and the rest of us. Besides the obvious genetic fortune and the abundance of training time that the professional lifestyle affords, there are additional tools, techniques and knowledge that further widens the gap between WorldTour pro and average joe.

A lot goes on behind the scenes to ensure the Bora-Hansgrohe team is maximally optimised come race day. No matter if we're talking domestiques, GC contenders, or out-and-out sprinters, a team of experts will look at every detail and leave no stone unturned in the pursuit of success.

I recently spent six days in Majorca with Bora-Hansgrohe during the team's December training camp and witnessed how Specialized and Retül integrate with the team to optimise riders on the bike, to ensure absolute efficiency, especially when it comes to comfort and aerodynamics.

During my time in Palma de Mallorca, I was shown the testing that the riders undergo, and put through some of the same processes myself in order to better understand the methods, and experience the benefits. I then sat down with Pascal Ackermann; maglia ciclamino winner at the 2019 Giro d'Italia, as well as 21-year-old Ide Schelling, one of the team's new recruits, who makes the step up from SEG Racing for the 2020 season.

Ide Schelling joined the team in September. As a new rider, it's a busy, yet exciting time for Schelling, who joined me to offer some insight into his first few months at Bora-Hansgrohe.

Medical tests are an important part of the induction to Bora-Hansgrohe. A heart ultrasound forming one of the initial steps, along with a concussion test involving a VR headset to set a 'zero reading', which will act as a baseline comparison should a rider require concussion testing post-crash throughout the season.

Performance testing is, understandably, a big part of the process for such a physically demanding profession. In addition to the expected VO2 max and lactate threshold tests, riders are put through their paces in a multitude of off-the-bike examinations.

"We did really broad testing with performance. Not only the oxygen tests on the bike, but also to see how flexible you are and to see if your core strength is right. We did a lot of tests to see if your coordination is right, to then see if you can improve this with specific exercises," explained Schelling.

Where Specialized and Retül come into the picture is the on-bike optimisation. There are three phases to the testing provided by Retül.

I am fortunate enough to have had a Retül fit previously, yet over time, frequent minor adjustments can add up to a vastly different position, especially after flying with your bike. Reassuringly, the Bora-Hansgrohe riders go through the same steps that £200 will buy you at your local Retül fit centre, with the main difference being the experience of the fitter undertaking the process; in this case, Jason Williams and Retül founder Todd Carver, who between them have over two decades of experience fitting pros and amateurs alike.

The data set that informs the Retül fitters is the same data set you and I would have, meaning the difference between a pro's fit and an average joe's fit generally lies within the boundaries set by Retül's complete pool of averages.

Jason Williams explained: "Our target ranges are scraped from every fit we've done as a group of retail fitters. Over the last decade, we scraped that data multiple times, meaning each couple of years, it evolves slightly.

"A pro fit could mean a difference in back angle; how low you are relative to the bars. We are accepting that the pros can ride a lower back angle, it’s still generally in range, but the pros might just hover at the lower end of that range."

That said, at the top level of the sport, the fit process becomes a little more artisan, as Williams went on to explain that there is a collective knowledge on what some of the pro ranges are, suggesting it’s not cooked into the software, rather it's a learning that comes with the experience of fitting such a large amount of pro riders.

My Retül fit came at the end of a four-hour ride, during which I suffered my regularly recurring left knee pain. After 20 seconds sitting on my Specialized Tarmac connected to a smart trainer, Todd Carver suggested my saddle looked to be too high and too far back. Around 45 minutes and multiple measurements later, his eye proved to be correct.

Professional riders are tested while fresh rather than fatigued. I asked the question as to whether different symptoms would be noticed if a second test was undertaken in a more fatigued state, but the Retül theory is that if a bike can be tailored to a rider's best-performing self, then that is the baseline on which to set the bike's fit, so as not to overcompensate at the detriment of the fresh rider's performance and comfort.

I also asked if riders were tested at different gradients, to see if greater power could be achieved for GC riders while climbing, at the detriment of flat-level performance. This is yet to be tested, but realistic use-case would likely only exist in uphill time trials such as stage 20 of the 2020 Tour de France.

Discussing the Retül fit with Schelling, it was clear the Bora-Hansgrohe rider has faith in the team around him. "The first bike fit was a month back, then we trained a little bit on the bike before coming here. Two days ago, I had a few saddle-sores on my left side and really slight pain in my right knee. I was happy that [Retül] were still here. They put me on a bike, but before, they already knew what it would be by just talking to each other. I was given custom footbeds because my arches are really high...yesterday the knee pain didn't come back."

The purpose of this is to personalise the earlier findings with the rider's goals in mind. Part of this process, for GC riders or time-trial specialists, is Retül's metabolic fit. Using a portable metabolic analyser, a rider's power output is measured alongside the metabolic cost of that effort. This is then tested at multiple positions in order to see how the metabolic cost increases or decreases with a change in position. Armed with this information, Retül can prevent making mistakes where the rider is sacrificing large amounts of power production or incurring early fatigue.

Schelling was one of the riders put through this process. "First I did the Retül to see the baseline fit on the TT bike, then after the Retül you do the metabolic; starting at 4cm above, then 2cm above, base level, 2cm below, and finally 4cm below. To see where your oxygen uptake is, and how many watts you lose. The lower you go, the more watts you lose, going higher, you can gain some watts."

Using a velodrome or wind tunnel, these positions are then tested for aerodynamic efficiency, as Schelling went on to explain: "Then the day after, we went to the track to test out the different positions to see which is fastest. At 2cm below, I already lost eight watts, so we didn't test them all, but we did move the width of the TT extensions because that saved me eight watts. It was such a cool experience to have ten guys there all working for me - it's something really new for me, but it's super cool to see the logic and math behind it. They're extremely smart guys. With my now-lower CDA, the calculation is eight watts better."

Delving into Pascal Ackermann's own experiences with Specialized and Retül, the German sprinter, who stands at 180cm and by his own admission, has short legs with a longer torso, has made a number of changes throughout his time with Bora-Hansgrohe. "We changed last year. Before, I had a 52[cm bike] and we changed to the 54, now we're thinking of going another size bigger to a 56cm. [The mechanics] built up a 56 in my position and now I'm trying that this week."

When asked whether this was instigated by himself or the Retül team, Ackermann confirmed he raised the initial query, and that he worked with the Retül team to find the best solution. "I went to Specialized and asked what we can improve. I wanted [my reach] to be 1cm longer, but I already use the longest stem available, so that's only possible in the 56cm. Now the question is do I stay in my old position and have a lighter bike that's more handleable, or change to a bigger bike that's less handleable and heavier. That's a decision I have to make in training."