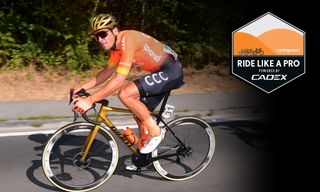 With the anomaly that is the 2020 season, all aspects of racing have been affected. Cancelled races have had a destructive knock-on effect for riders, teams and sponsors alike. Even now as racing has now resumed, there has been a remarkable amount of drama with a packed calendar and riders and teams keen to salvage what's left from a season that many will be looking forward to seeing the back of.

Greg Van Avermaet has not been spared from the disruption. The Classics specialist saw his season's focus crumble away in front of him as well as the speculation that CCC Team are on the hunt for a new sponsor. To compound the disruption, the reigning Olympic road race champion will have to wait another year before he can defend his title in Tokyo. However, with racing back in the calendar, Van Avermaet has seemingly picked up where he left off, with three top 10 finishes in three one-day races, as well as 2nd on GC at the Tour de Wallonie. And having signed a new three-year contract with the AG2R La Mondiale team, which will be known as AG2R Citroën, the future can be regarded a little more optimistically.

To round off Ride Like A Pro week, Cyclingnews caught up with Greg Van Avermaet on season planning, training, indoor racing, how he has approached training around the uncertainties of the 2020 season, what qualities lead to a successful pro career and the process of choosing what bike to race.

1. How do you typically schedule your training? Do you aim for a single peak for the Classics or multiple peaks?

In a usual season, I normally aim for two big peaks, one for the Classics and the other one for the Tour de France. These two goals have been part of my calendar for a long time now so I am quite used to conditioning my body for these two blocks.

Normally I’ll keep fit during the winter, maybe ride the mountain bike a bit and start building up in late January and February for the Classics. I really like riding my bike so often I probably don’t rest as much as I should in the offseason. There is normally about seven or so weeks between Omloop Het Nieuwsblad and Liège-Bastogne-Liège so it’s hard to stay at top form during this time. After the Classics, I take it easy in May and then build up in June again for the Tour de France. I always come out of the Tour in really good shape so that works well for a race like Clasica San Sebastian. Then I guess I have another mini peak towards the end of the season which races like Quebec and Montreal, where I always race well. This year it is a little different and my goals, the Tour de France and the Classics, are more condensed so I’ll be aiming for one big peak at the Tour de France and then carrying that on through the Classics.

3. Are you generally involved in the planning?

I speak a lot with my trainer Max Testa, and we work out the plan together. I am someone who rides and trains more on feeling so I don’t need a really strict training program.

4. The season was put on hold at a point when you're usually building form for the Classics, how have you adapted your training to account for the break?

It was a strange time when the season stopped and in a lot of ways hard to change the training plan as at the beginning, we had no idea how long the break in the season would be. When it became clear that we wouldn’t be racing for a quite a long time, I took it as more of an offseason. So I had a little bit of time off the bike and rode my Giant Anthem MTB a lot. It was nice to discover my region a bit more.

5. And for lockdown as a whole, how has that been? What have you been up to?

I have to say lockdown was really not bad for me. I enjoyed spending more time with my family, the most I ever have really, and I know I was lucky because in Belgium the restrictions were not as bad [as other European countries]. So, I was able to train on the road the whole time which I am grateful for. That made a big difference and I know I wouldn’t have enjoyed it if I was stuck inside all day on the turbo trainer.

6. You seemed to keep condition throughout - as shown during indoor races - was that intentional?

I wanted to maintain a base level of fitness as you never knew if suddenly things could change and we would race earlier than expected and when it came to the indoor races, I think I was able to race well as I was still training on the road and I have quite a high threshold for suffering and that’s what those indoor races are all about; pure suffering!

7. Are you a long-term user of a turbo trainer or was it new? Will you continue to use it?

8. You've spent a number of years at the sharp end of WorldTour races. To what do you attribute that success the most?

I have always been a really consistent rider so I think my success can be put down to my training as I train a lot, my ability to suffer and probably my determination. In my whole career, I have only stopped a race nine times so I think that shows that I don’t like to give up.

9. Do you remember your first bike (can you tell us about it)? How many do you own now?

It was a small Concorde when I was 7 years old as I think my dad wanted to push me onto a racing bike. Now I have nine Giant bikes on rotation throughout the season with the TCR, Propel, and Trinity. This includes home training bikes and race bikes. And then I still have a number of bikes from the earlier years of my career, too.

10. When it comes to bikes and equipment. Are you involved in decisions being made? (such as Propel vs TCR, what tyre pressures to run, whether to use tubeless or tubular tyres, etc)

I can decide what I want to race on but I always speak a lot with the mechanics and Giant to work out the best bike and equipment options for different race conditions. We are lucky with Giant because we are racing on some of the best road bikes and components in the WorldTour so it’s much easier to decide what to race on when you know that everything is good.

11. What do you feel is the most important aspect of a pro-level bicycle?

When you race at this level I think the most important aspect of a bike is the lightness and stiffness. A bike needs to respond well and how light and stiff it is will really influence this.

12. It's just been announced that you're joining AG2R, whose contract with Eddy Merckx bikes runs out at the end of 2020. Will you be continuing on Giant bikes with your new team?

AG2R La Mondiale are yet to announce the new bike sponsor so I won’t comment on which bike brand it is likely to be.