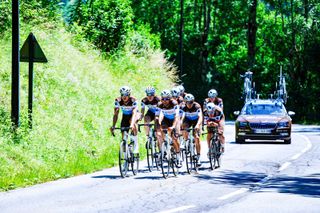 Citroën will come on board as co-sponsor of AG2R La Mondiale from the beginning of the 2021 season. Vincent Lavenu’s French WorldTour squad will be rebranded as AG2R Citroën Team from January.

The news was announced by the team on Thursday afternoon, and the arrival of the car manufacturer as co-sponsor was heralded in a brief statement as “a new chapter in the history of the team.” No details were provided regarding the duration of the sponsorship agreement.

Lavenu founded the team as Chazal in 1992 before Petit Casino took over as title sponsor in 1996. The team rebranded as Casino in 1997 when it received a sizeable budget increase and promotion to cycling’s top flight.

AG2R signed on as a sub-sponsor in 1997 before becoming the team’s main backer in 2000. The French insurance firm will remain a lead backer in 2021 but Citroën’s name will also feature on the jersey.

On Thursday, Citroën’s social media accounts featured the brown and blue logo of the AG2R team, suggesting that the squad’s colours will remain unchanged despite the arrival of a new sponsor.

Citroën had previous links to cycling in the late 1990s through an advertising campaign in Italy featuring Marco Pantani, though the contract was not renewed at the end of 1999, with footballer Gianluca Vialli replacing Il Pirata.

In recent years, Citroën had a partnership with football club Paris Saint-Germain, though the deal expired in 2017. Citroën is the second automotive brand to be announced as a WorldTour sponsor in recent weeks after it was confirmed that Team Ineos will be renamed as Ineos Grenadiers for the 2020 Tour de France.

In a brief statement on Thursday, the AG2R team said further details of the partnership with Citroën would be announced at an “exceptional press conference organized by the cycling team” on August 28, the eve of the Grand Départ of the Tour.

AG2R leader Romain Bardet has been heavily linked with a move to Team Sunweb for 2021, while Pierre Latour – best young rider at the 2018 Tour – is reportedly set to join Total Direct Energie next season.

Oliver Naesen, Benoît Cosnefroy and Larry Warbasse are among the AG2R riders who have already committed to the team for 2021 and beyond, while the Belgian press has reported that Olympic champion Greg Van Avermaet could join the squad from CCC Team.