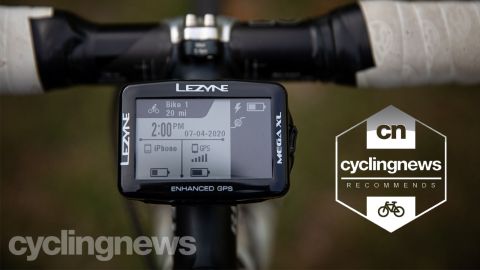 Over the past couple of years, the best cycling computer market has become increasingly cutthroat. While Garmin is still arguably the brand to beat, there's no doubting the upsurge of rivals chipping away at the GPS behemoth’s dominance.

Lezyne launched the Mega XL back in 2018 boasting a large high-contrast screen with a claimed battery life that more than doubles computers that cost twice as much. The computer offers no shortage of data, turn-by-turn directions and mapping too, at a reasonable price. But, as we’ve learned over the years, firmware can make or break a computer, even if it has every bell and whistle.

The Mega series of computers may not possess the same classy look like the brand's impressive range as tools but it's still an impressive object to behold. The materials and finishing are as good if not better than Wahoo or Garmin but in terms of its dimensions, it's pretty chunky. The computer is deep, which combined with the tall mount has it flapping in the wind well above your bars. Lezyne, along with a few third-party outfits produce out-front mounts which will alleviate this problem to a degree — though I can’t say this with total authority as I only used the standard rubber-band mount during my testing.

Speaking of the mounts, Lezyne uses a 1/8th turn system that requires a push and turn to unclip the computer, a bit like medicine bottles or containers. This mount is unflappable, and I have full confidence that your computer would stay connected in the event of a crash - this I can say with total authority following a trip over the handlebars which sent my mountain bike cartwheeling into the scrub.

The high-contrast monochrome screen measures 35.3mm x 58.8mm, and the computer can display everything in portrait or landscape. I preferred the latter for data, but portrait mode shows you a bit more of the route ahead when mapping. With early versions of the Mega XL’s firmware, menu items were always presented in portrait style (even if landscape orientation has been selected) - Lezyne has now ironed this out with a subsequent update.

With most computers going the way of touchscreens, Lezynne has opted to utilise a typical four-button layout with two on either side. With each button serving multiple functions, there is a learning curve as to which button does what, but as you spend a bit of time with the computer it becomes second nature.

With the ability to display five screens of ten data fields each there is no shortage of information available, the layout of each page can be set up through the companion app. The computer will support all your standard metrics such as speed, distance and time; as well as more advanced data like Normalized Power, Power Balance and TSS.

The Mega XL will also show you the status of all your connected devices on one screen in an easy-to-read format. No other computer we’ve come across to date displays how much juice your connected devices such as power meters have left quite as efficiently. Rather than having to check multiple apps to see if your power meter pedals or AXS drivetrain is soon to run flat, everything is displayed on one screen just after start-up.

The computer speaks to both ANT+ and Bluetooth, with the latter extending to both phones and sensors. I’ve read many accounts of people experiencing dropouts or issues with phone connectivity; however, in my three months of testing, I have not experienced such problems. In fact, the phone connection is vastly more reliable than I’ve experienced with the Garmin Edge 1030 and Edge 830.

Although the actual connection is reliable, the data transfer speed via Bluetooth is like cold molasses. Whether you’re downloading offline maps (more on this later) or uploading a finished activity to the app if you’re in a hurry, you are better off to plug the unit into your home computer, and sync with the Lezyne Root web app — both the web app and mobile app will automatically push activities to the third-party service of your liking. It's worth pointing out that the Lezyne has opted for a Bluetooth LE (Low Energy) connection, which does slow down the connection speed, but also helps the computer achieve is Energizer Bunny like battery life.

The Mega XL offers both basic breadcrumb mapping with turn-by-turn directions and map-based navigation but with a caveat. The Mega XL does not come with base maps pre-installed, however, ‘offline maps’ can be downloaded using the Lezyne desktop app, or your phone — I would highly recommend the former as syncing even small maps from your phone takes a while. Once they are on the computer, the base maps serve as more of an overlay, as they don’t display street names like those you’d find on Garmin, Wahoo or Sigma computers.

Routes can be created through the mobile app, made on your computer through the Lezyne Root app or with a TCX or GPX file. As always my test for a GPS head unit's mapping algorithm is to create a course along the Darren Smith Memorial Route here on Australia’s Gold Coast to test whether or not it will guide you along quiet side roads, or just take the most direct route. This is the ideal test, as the DSMR is not only one of the most popular cycling routes in Southeast Queensland, but also runs parallel to the Gold Coast Highway.

When you plug a destination into the Lezyne Ally V2 app, it provides multiple routing options, the first being the most direct route up the highway, but the second followed the DSRM for the majority of the course, it wasn’t perfect but offered a much safer path than Garmin’s Trendline popularity routing.

The directions are easy to follow, with the computer overlaying chevrons on the map screen, or giving you popups if you’re looking at a data page to tell you a turn is coming. If the computer is connected to your phone, and you miss a turn, it will try to get you back on course, though you’re probably better off to backtrack. Similarly, if the computer has a live Bluetooth connection to your phone, it can send out a live tracking link to a predetermined contact, though this takes quite a toll on your phone battery.

When it comes time for structured training, the Mega XL will guide you through your workouts which can be synced from services such as Training Peaks or Today’s Plan — no TrainerRoad ‘Do outside’ functionally yet. The computer will also connect and control a smart trainer if you have one. However, with the mass proliferation of training apps, I can’t imagine many people will take advantage of this functionality.

The feature that’s likely to attract most people's attention is, of course, the 48-hour claimed battery life. This is more than double anything that Garmin or Wahoo offers, with the only thing that comes close being some of Bryton’s computers such as the Rider 420. So far in my three month testing period, I've only had to charge the Lezyne Mega XL one time, so although I didn't outright test to see if the unit will run for 48-hours straight, I’m more than happy to say it will come pretty darn close.

When I first received the Mega XL for testing I had more than one person tell me to watch out for the device crashing, especially during long activities. I can only speak for my experience with the device, but I had no such issues, and through my entire test period it has been pretty much flawless.

When you compare similarly priced head units such as the Garmin Edge 130; the mapping and navigation is better, the app integration is better, it can display more metrics including advanced power data, and the battery lasts three times as long.

It’s not perfect, the Bluetooth connection is slow, and there is a slight learning curve, but these are only minor chinks in the armour. At this price point, there's only one option worth considering and that's the Lezynne Mega XL.