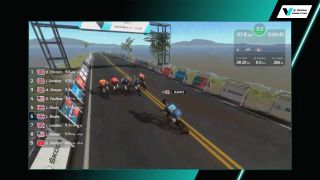 Dani Christmas (Lotto Soudal) won the opening stage of the SKODA V-SERIES Women's Tour on Wednesday. Christmas started her sprint with 200 metres to go and crossed the line with the win ahead of Illi Gardner (CAMS Tifosi) and Amelia Sharpe (Team Breeze).

"The legs were nipping a bit at the end but it was fun to do," said Christmas while warming down. "It was hard from the start and you really have to pay attention as as soon as there is a small gap you really have to push a few watts to get back to the bunch.  I think there were a few people caught out that way."

The V-SERIES Women’s Tour opened with a 38.4km stage to Bury St Edmunds in Suffolk.

The race started at over 50kph with watts as high as 6 w/kg but the bunch stayed together along the flat and slightly-downhill opening sector of the route. As the speeds increased, the main field thinned down to roughly 25 riders.

The lead group remained together inside five kilometres to go with teams Rally Cycling, Bigla-Katusha, CAMS Tifosi, Drops, Lotto Soudal, Bizkaia Durango and Storey Racing. The bunch stayed together coming into the final two kilometres for a small groups sprint.

There were no final attacks in the closing kilometre and Illi Gardner (CAMS Tifosi) started her sprint with 300 metres to go, followed by Lizzy Banks (Bigla-Katusha). In the end, it was Dani Christmas (Lotto Soudal) who came around the pair and crossed the line first with the opening stage victory.

The V-SERIES Women’s Tour is held on the RGT Cycling virtual platform in support of Breast Cancer Now and Mind.

The new SKODA V-SERIES Women's Tour will be streamed live on Cyclingnews. The three-stage virtual event takes place from June 17-19, with the racing starting daily at 2 p.m. EDT / 7 p.m. BST. Join us for stage 2 on Thursday, June 18.