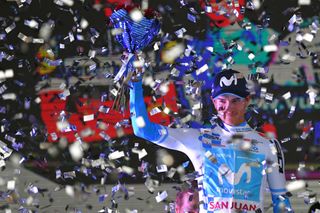 Following its elevation to the nascent UCI ProSeries category, the Vuelta a San Juan is now – together with the Tour of Utah – the most prestigious bicycle race in the Americas, but the appeal of the Argentinian event stretches beyond the ranking points on offer at the end of its seven stages.

Like the now-defunct Tour de San Luis, the race brings a select cadre of WorldTour riders to Argentina's arid Cuyo region to race in a peloton composed primarily of riders from Latin America, making the event a rare point of confluence between the top level and those aspiring to join it.

For men like Julian Alaphilippe, Remco Evenepoel (Deceuninck-QuickStep) and Peter Sagan (Bora-Hansgrohe), the Vuelta a San Juan offers a marginally gentler opening to the season than WorldTour fare at the Tour Down Under.

A sizeable portion of the peloton, meanwhile, will look on the race as a chance to make the kind of impression that a youthful Fernando Gaviria (UAE Team Emirates) did when he sprinted to two stage wins in San Luis in 2015.

Peter Sagan to start 2020 season at Vuelta a San Juan

Twelve months ago, Alaphilippe and Evenepoel began their seasons in San Juan, and they return this year with Zdenek Štybar at the head of a strong Deceuninck-QuickStep squad, who dominated the headlines on and off the bike in 2019.

At the team's training camp earlier this month, Evenepoel spoke of his desire to hit the ground running in Argentina, and he will be an obvious contender for overall victory on a route that features a short time trial on stage 3 and the summit finish on Alto Colorado on stage 5. Alaphilippe, of course, won the time trial last season en route to second place overall behind Winner Anacona, who is, like Arkéa-Samsic teammate Nairo Quintana, an absentee this time out.

After combining the Tour Down Under and Vuelta a San Juan in 2019, Sagan has limited his Southern Hemisphere swing to one race this year, mindful of a hectic programme that will include the Classics, Giro d'Italia, Tour de France and Tokyo Olympics. The Slovakian will find time to squeeze in an appearance at his eponymous Gran Fondo, which takes place on the Vuelta a San Juan's rest day on Thursday.

Sagan turns 30 on the opening day of the race and the likely bunch sprint on Sunday offers him a chance to mark the milestone with a win, though he will face stiff competition from Álvaro Hodeg (Deceuninck-QuickStep), Christophe Laporte (Cofidis) and, above all, Gaviria, who reunites with lead-out man Maximiliano Richeze following the Argentinian's transfer from Deceuninck-QuickStep to UAE Team Emirates.

Brandon McNulty is another UAE Team Emirates debutant, while Guillaume Martin will compete in Cofidis colours for the first time. Israel Start-Up Nation and Movistar complete the line-up of WorldTour teams in Argentina, with Eduardo Sepúlveda and Carlos Betancur the leading lights for the Spanish squad.

Four Pro Continental teams make the trip to Argentina, with Giro d'Italia invitees Androni Giocattoli-Sidermec, Bardiani-CSF and Vini Zabù-KTM joined by a Rally Cycling squad that features new arrival Nate Brown. The Ineos pairing of Filippo Ganna and Leonardo Basso are included in an Italian national selection, while there are some notable names among the contingent of Latin American teams.

43-year-old Óscar Sevilla, who hasn't raced for a European team since 2007, lines up for Team Medellin, while José Rujano – third overall at the 2005 Giro and now a month shy of his 38th birthday – is included in the Venezuelan national team selection.

Two-time Tour de San Luis winner Dani Díaz is on hand for Transportes Puertas de Cuyo. The second of those triumphs earned him a two-year stint with Delko Marseille. The trip to Argentina may amount to an early-season tune-up for the European visitors, but they will, as ever, encounter a full-throated race when the road climbs.

The province of San Juan is Argentina's second most prestigious wine region, behind its more renowned neighbour Mendoza, and the terrain – near desert meets the beginnings of the Andes – lends itself neatly to a week-long stage race. With midday temperatures approaching 40°C in San Juan this week, meanwhile, it is notable that the stages are again all scheduled for late afternoon, with most finishes slated for between 7:30 and 8pm local time.

Indeed, the 2020 route follows a familiar format, with a short individual time trial, a rest day and a summit finish on the Alto Colorado all featuring once again in 2020. The opening stanza, however, should belong to the fast men. The three ascents of Punta Negra on stage 1 shouldn't be enough to deny the sprinters in San Juan, while stage 2 in Pocito is broken up by just one, relatively minor category 3 ascent.

The general classification contest will begin in earnest on stage 3, a 15.5km time trial that climbs gently towards Punta Negra. Alaphilippe won the corresponding stage a year ago, an early indication of what was to come in Pau on the Tour de France. His teammate Evenepoel might well be favoured to triumph this time out, though Ganna, McNulty and Maciej Bodnar (Bora-Hansgrohe) will also have circled this stage in their road books.

The race enters more rugged terrain on stage 4 from Jáchal to Valle Fértil, where, around the midpoint, the road abruptly climbs more than 500 metres in a three-part ascent spread over a little more than 10 miles. That should break up the peloton though the almost 80km drop towards the finish line gives the sprinters a fighting chance of deciding the honours once more.

Thursday's rest day is followed by the Vuelta a San Juan's keynote stage, which brings the race into the Andes for a summit finish at Alto Colorado, some 2,565 metres above sea level. Indeed, the final 100km are almost exclusively uphill, with the category 3 Alto de Villicum, category 2 Baños de Talacasto, and Alto de la Crucecita serving as a prelude to the 15km haul to the finish.

The Alto Colorado has an average gradient of just 4.4% and maximum slopes of 6.4%, but its altitude – particularly at this early juncture in the season – makes it a demanding test. Evenepoel and Alaphilippe will hope to shine, as will Guillaume Martin. Sepulveda and 2015 Tour de San Luis winner Dani Diaz (Transportes Puertas de Cuyo) should lead the home challenge, while Oscar Sevilla (Team Medellin) will look to continue the startling South American coda to his career.

At first glance, stage 6 lends itself to the sprinters, but the short, sharp rise before the finale on the Autódromo Villicum might present a platform for a puncheur like Alaphilippe or Štybar. The flat and uncomplicated criterium on the final evening in San Juan, meanwhile, can only finish in a bunch sprint.