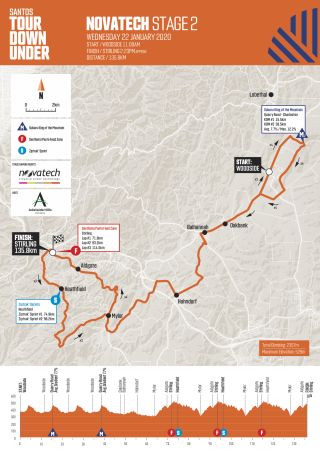 Stage 2 takes the riders 135.8km from Woodside to the uphill-sprint finish in Stirling (Image credit: Tour Down Under)

This is one of my favourite stages at the Tour Down Under. I'm a real fan of the finishing circuit in Stirling because it's just a really great stage to ride. The uphill finish isn't super hard, but it shows who has the real form. A sprinter with no form isn't going to be able to get up there, but some of the faster finishers with really solid condition from over the winter will be able to manage it.

Michael Matthews has won there, Caleb Ewan has won there. It's super hard but, more importantly, if you misjudge the finish, you're in trouble because there's a slight downhill and then it ramps up again. You have to get that jump right. For the GC guys, you need to be up there, too, because it's such a long and hard drag. There are going to be some gaps on this stage and we'll start to see who can win the GC at this point. Time bonuses on this day could be really crucial for the overall standings come the end of the week.