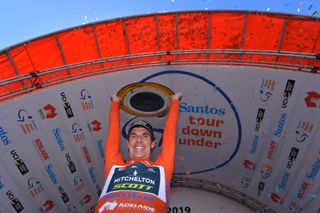 Mitchelton-Scott head sports director Matt White has said there has been "no harder Tour Down Under  course over the last 22 years" and knows that his rider, South African Daryl Impey, will have his work cut out trying to beat big rivals Richie Porte and Rohan Dennis if he is to take a third-straight overall victory at the Tour Down Under.

If stage 3 to Paracombe comes alive for the climbers then Simon Yates (Mitchelton-Scott), AG2R La Mondiale's Romain Bardet and Richie Porte (Trek-Segafredo) could distance the puncheur like Impey and set up for a battle royal on Willunga Hill on the final day.

Last year's race threatened to ignite among the climbers on the climb of Corkscrew on stage 4 from Unley and Campbelltown, when Porte, Michael Woods (EF Education First), George Bennett (Jumbo-Visma) and Wout Poels (Team Sky) got away, only for the ever-attentive Impey to scream down the descent, catch the front group with two kilometres to go, and then beat them all to win the stage.

While Impey is back to try to complete the hat-trick, Porte remains the last climber, and arguably the only Grand Tour climber, to have won the race, in 2017, taking the overall victory from another rider from Esteban Chaves, with Bora-Hansgrohe’s Jay McCarthy taking third. Could this year's course favour Porte – and Yates, Dennis and Bardet – significantly more than Impey?

Mercifully, the temperatures forecast for this year's race are in the mid- to high-20Cs – a significant drop compared to previous years, and even compared to the recent high temperatures during the holidays. The major bush fires are 800 kilometres away and so the stage is set for what could be an extremely close race between some of the world's very best riders.

While new Team Ineos signing Dennis has recently announced that his days of targeting the GC at Grand Tours are likely over, the South Australian local still has what it takes to conquer the finish at Paracombe on stage 3 – as he did in 2015, en route to the overall victory – and then to hold his own on the final stage to Wilunga Hill if he's in a winning position.

Porte will come to Adelaide again hoping to repeat his 2017 victory, and while Mitchelton-Scott is the team most likely to stand in his way with defending champion Impey and 2018 Vuelta a España winner Yates, AG2R's climber extraordinaire, Bardet, may also find his early-season legs on the climbs and find himself in a position to battle for the overall classification. His rivals see his announced low expectations as a final warning rather than a true indiction of the Frenchman's form.

It may be more of a climbers' race then ever, but this year's Tour Down Under still welcomes a whole host of top-notch sprinters.

The 37-year-old German has little chance of winning the GC this year now that the race has become that much harder, but fans would be only too pleased to see 'The Gorilla' take another TDU stage win, which would be his first since 2018.

And then there's new road race world champion Mads Pedersen – Porte's teammate at Trek-Segafredo. The 24-year-old will be targeting this year's spring Classics back in Europe, but don't be surprised to see the young Dane show off his new rainbow jersey on the roads of South Australia in the coming weeks – perhaps in a breakaway or two.

Alcohol maybe off the menu at Lotto Soudal but don't be surprised to see Thomas De Gendt on the attack through the South Australia vineyards. Nathan Haas could be aggressive on the hilly stages as could dark horse Diego Ulissi (UAE Team Emirates).

After the 'prelude' that is the Schwalbe Classic criterium – formerly known as the Down Under Classic – gets things under way on Sunday evening, on a new, more central Adelaide circuit, the stage race kicks off with stage 1 on Tuesday, January 21.

The opening stage is slightly unusual in that it's made up of five laps of a 30km circuit, starting and finishing in Tanunda, in the heart of the famous Barossa Valley wine region.

Mid-way through the circuit, many riders will remember the uphill drag into Angaston, where CCC Team's Patrick Bevin won the stage last year. This time around, the riders will carry on through to Penrice, where they'll have to tackle the short but very sharp climb of Breakneck Hill, which only reaches a maximum of 10 per cent but certainly looks a lot worse.

Either way, five ascents of it – with the second and fourth times up it counting towards the climber's jersey – will take its toll, even though it's likely to all come down to a bunch sprint. Those 'king of the mountains' points will likely cajole a day-long breakaway out of the peloton early on, though.

Stage 2 from Woodside to Stirling, going through some of the areas affected by the recent bush fires, will be a sobering experience on what is a classic, and well-loved Tour Down Under stage.

The uphill drag into Stirling – tackled four times, thanks to the 25km-long finishing circuit – saw Ewan take the victory last time the race visited, in 2018, winning from then Mitchelton-Scott teammate Daryl Impey. If Impey wants to win a third overall title, he'll need to be there or thereabouts again, but Lotto Soudal's Ewan will be the one to beat, and you can expect to see Viviani and Haas in the mix in Stirling, too.

While the tough-enough two opening stages should nevertheless see a sprinter in control in the ochre leader's jersey, everything will change with the stage 3 uphill finish at Paracombe.

Whoever takes the race lead there will have to defend it over the following two stages – to Murray Bridge on stage 4 and Victor Harbor on stage 5, which should go the way of the sprinters – before the race's final stage with its two climbs of the iconic Willunga Hill, finishing after the second ascent.

Porte has made the climb his own on the last six occasions, while Impey has won his last two titles by managing to cling to the Australian's coattails.

The presence of Yates and Bardet might suggest otherwise but whatever happens, the riders, fans and race personnel will be hoping that it's a fitting farewell to Mike Turtur in his last race as race director.