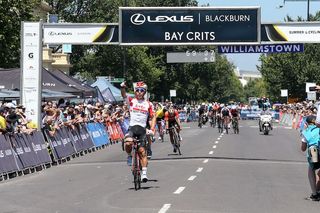 The final round of the Lexus Blackburn Bay Crits in Williamstown – closer to Melbourne than the previous two days' races in Geelong – is, says Australian criterium champion Brenton Jones, "one of my favourites".

The overall winner of the series in 2014 has yet to win in Williamstown, but in the absence of last year's winner on the course, Lotto Soudal's Caleb Ewan, Jones fancies his chances.

"I think I've been second to Caleb two or three times there, so I think I know how to race it. And he's not here this year, so I'm hoping to take it out," Jones told Cyclingnews.

"It's a fast circuit, with nice, flowing corners. You have to brake a little bit, but otherwise it's a pretty straightforward square criterium," he said of the four-corner, 930m-long 'circuit', where Katusha Sports' Marco Haller held on to take the overall title in 2019.