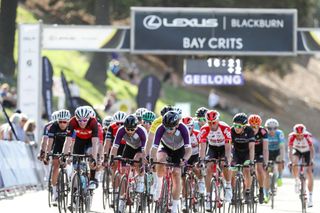 The first two of the three Bay Crits races switch places for 2020, which means that proceedings kick off on January 3 with the Ritchie Boulevard circuit in Geelong.

It was won last year by Lotto Soudal's Caleb Ewan, but the race on the 650-metre circuit up and down Geelong's East Beach will be much more open this year in the sprinter's absence, and so should provide the watching crowds on the circuit's famous grass bank that overlooks the start and finish area with plenty of excitement.

"There are often no more than 20 riders that finish that race – maybe even 15 – and when you look at the elite field, you're only again going to have about that many that finish this year as it's so demanding," he told Cyclingnews.

"It's a sprint, corner, sprint, corner kind of race, and you've got to do that for an hour, so it's about positioning," explained Jones, who'll ride for British Continental team Canyon dhb p/b Soreen in 2020, following two seasons with Delko Marseille Provence, "so the top 20 or so just stay as they are, and the ones at the back just get tailed off the back."