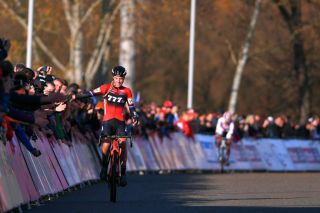 Annemarie Worst (777) made it a weekend to remember, winning the DVV Verzekeringen Trofee- Flandriencross for a second time in two years, 24 hours after raising her arms in Tabor in the World Cup.

Like many of the other big names, the 23-year-old Dutchwoman made the trip from the Czech Republic to race again in Hamme, in north Belgium, for the second round of the DVV Trofee.

Worst got the better of world champion and home rider Sanne Cant, while Ceylin del Carmen Alvarado (Corendon-Circus), who placed second in Tabor, rounded out the podium.

The women covered five laps of a fast course in Hamme. On the first lap, Worst went clear with Cant and Alvarado, and they were joined by Kastelijn on the second lap.

The group stayed together until a climbing hairpin, where Worst put in a big acceleration. She carved out a small lead through the tight corners and straight sections before holding it through the twisting wooded section at the end.

Cant, who had given chase all along, had to settle for second as Worst launched one last sprint for the line to make sure, while Alvarado beat Kastelijn.

Worst now takes the lead in the DVV Trofee series, having finished second behind Kastelijn in the opening round of the Koppenbergcross two weeks ago.