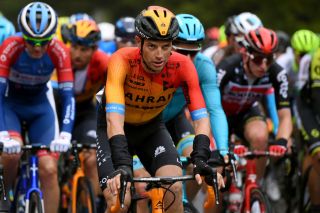 Damiano Caruso (Bahrain McLaren) took his first individual win since 2013 as he soloed to victory at the Circuito de Getxo.

Caruso held off a chasing pack on the uphill finish, crossing the line just a few metres ahead of Giacomo Nizzolo (NTT Pro Cycling) and Eduard Prades (Movistar Team). It is just Caruso’s second individual professional win after taking a stage of the 2013 Settimana Internazionale Coppe e Bartali.

The Italian made his move from a small breakaway group, which contained his teammate Pello Bilbao, with eight kilometres remaining. The reduced peloton had Caruso, whose advantage was never more than 20 seconds, in their sights but Nizzolo’s kick was not enough to overhaul his compatriot.

Under the typically changeable Basque weather, the finale of the one-day Circuito de Getxo was a frenetic one. Oier Lazkano (Caja Rural-Seguros RGA) was the last man standing from the early breakaway, but with just over 30 kilometres remaining, his lead was fast diminishing.

Sensing an opportunity, multiple riders attacked off the front of the bunch in an attempt to bridge across to the lone leader, but they were all soon caught. Alessandro Fedeli (Nippo Delko One Provence) decided to take things into his own hands and pushed clear with about 24 kilometres remaining.

Behind Fedeli, several riders fell victim to the slippery roads, including Mikel Landa (Bahrain McLaren) who was at the race after a strong week at the Vuelta a Burgos. After remounting his bike, the Basque man gave the thumbs up and looked not too hurt by his encounter with the tarmac.

Despite Landa’s fall, Bahrain McLaren kept the pace up at the front of the peloton and ended Fedeli’s attack some six kilometres after it began. With one more climb to come before the finale, the scene was set for the team.

As the break was approaching the final 10 kilometres, Serrano, Girmay and Lopez came down hard on the descent while approaching a roundabout. Oliveira came through it by the skin of his teeth and only narrowly avoided coming down too. He made it back to the Bahrain pair but had no response when Caruso made his move with eight kilometres remaining.

The chasing peloton swallowed up each of the dropped riders but did not have enough to take back a determined Caruso, who had enough time to glance over his shoulder before celebrating as he crossed the line.