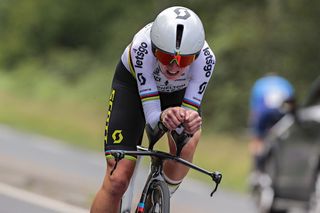 Annemiek van Vleuten (Mitchelton-Scott) was unbeatable in the last two editions of the Boels Ladies Tour, winning the prologue and wearing the leader's jersey from start to finish.

Both times, the world time trial champion sealed her overall victory in the time trial – but, this year, she'll have to look elsewhere to take time on the competition as the race doesn't feature a long time trial — only a 3.8km prologue on Tuesday.

"It's a bit disappointing that they took out the time trial and the hilly stages," Van Vleuten said of the changed route.

"But stage 3 could have some ingredients to race hard on, so I can take that opportunity to at least give it a try. Then on Saturday and Sunday the race finishes very close to where I live now, and is actually my training area in Arnhem. And I get to wear my rainbow jersey on the first day which is special because I haven't done many time trials this year."

The six-day stage race starts with a prologue in the Tom Dumoulin Bike Park in Sittard on Tuesday. At just 3.8km in length, it's a technical affair with a number of corners and several 180-degree turns. The many accelerations will play to the strengths of explosive riders rather than tempo time triallists. Due to the short distance, time differences will be small, but even a one-second gap could become crucial at the end of the race.

On the road stages, there are time bonuses of 10, six, and four seconds for the top-three on each stage, as well as three, two, and one on offer at bonus sprints on each stage. Without a long time trial, these bonus seconds might end up deciding the overall winner.

Stage 1 — 123km from Stramproy to Weert — is flat. With the right wind direction, it may be possible to split the race into echelons, but this is far from certain. The bonus sprint comes after the first of three laps of an 8.4km finishing circuit, and the stage is very likely to end in a sprint.

The next day's stage consists of four laps on a flat 29.1km  circuit around Gennep. Echelons are very unlikely here due to the layout of the circuit, and a mass sprint is the most likely outcome. If a strong sprinter placed well in the prologue, they could take over the GC lead after this stage.

Stage 3 around Nijverdal is a wholly different affair. At 156.8 kilometres, this is both the longest and the hardest stage of the race. On five laps of a circuit over the hilly Salland heath, there are three bonus sprints (on the first, third and fifth lap) on the hardest climb of the day: the 760-metre, five per cent Motieweg. There will be attacks on the final lap by those who need to take time on the sprinters, and a group of strong riders could make it to the finish.

Stage 4 covers 135.6km from Arnhem to Nijmegen. The first 50km include a few hills in the Hoge Veluwe as well as the Grebbeberg, but the decisive climb is the Oude Holleweg. Climbing 860 metres with an average gradient of 8.6 per cent and with a combined mountain and bonus sprint at the top, it is an excellent springboard for attacks 11 kilometres from the finish. In 2018, Van Vleuten held off the peloton to take a solo victory in Nijmegen.

The final stage of 154.8km starts in Nijmegen and brings the peloton back to Arnhem the long way around. Most of the stage is flat, with the difficulties only coming at the end. The well-known Posbank climb after 121.6km offers the last bonus sprint of the race and rings in the finale, culminating in a nine-kilometre finishing circuit. Raced three times, it is continuously up and down, including the one-kilometre, four per cent climb of the Apeldoornseweg.

Van Vleuten will have her work cut out if she wants to win the general classification for a third time. The Mitchelton-Scott team has announced that it will primarily target stage wins and has several cards to play for that. In the end, it could be Sarah Roy, a durable rider with a decent sprint, who becomes the team's GC rider – but even with the parcours not in her favour, Van Vleuten should never be underestimated.

Anna van der Breggen (Boels Dolmans) recently showed her form with a solo victory at the GP de Plouay. The road world champion will try to break the race apart on the last three stages, but, if this shouldn't work out, Amy Pieters will be ready to pick up the baton. Pieters can get over the hills and has an excellent sprint, and when Van der Breggen or Chantal Blaak are on the attack, she won't have to work in the group behind. As even the hilly stages could end in group sprints, Pieters may even have a bigger chance of finishing on the overall podium.

Marta Bastianelli (Team Virtu Cycling) is a rider with similar qualities to Pieters, and is arguably even stronger. The 32-year-old Italian has enjoyed an excellent season, with several high-profile victories and can be counted on to be present at the front on all stages.

Team Sunweb line up with several riders who could contend for the overall win. On home soil, Lucinda Brand is probably the team's strongest card. As a rider who also does cyclo-cross, she can produce a strong prologue, and Brand will be seen at the front on the hilly stages. She also has a decent sprint, while teammates Leah Kirchmann and Floortje Mackaij won't be far behind Brand.

Lorena Wiebes (Parkhotel Valkenburg) is one of the top favourites for the sprint stages. The 20-year-old Dutch champion has improved consistently throughout the year and will enjoy her team's full support, including on the more difficult stages. It is not out of the question that she can survive the hills, and, if she does, she will be a favourite for the overall win as well.

Kirsten Wild (WNT-Rotor) will be Wiebes' main sprint rival as she is the only rider who could consistently beat Wiebes in sprint finishes this year. Like Wiebes, Wild can get over the hills if they're not raced too hard, but it is more likely that the team will focus on Lisa Brennauer and Janneke Ensing when the going gets tough.

With Alice and Hannah Barnes, as well as Lisa Klein and Elena Cecchini, Canyon-SRAM have four riders with a good turn of speed, all of whom can hold their own in the hills as well. It will be a question of which rider the team decides to support. There is also Kasia Niewiadoma who is almost guaranteed to attack when the road goes up.