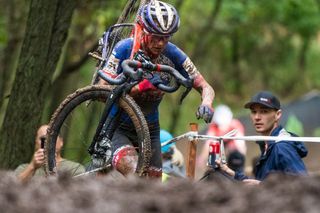 Luna's Katerina Nash on her way to victory at the second round of the 2019 Cyclo-cross World Cup in Waterloo, USA (Image credit: Dejan Smaic)

The world's best cyclo-cross racers are in action at both the second round of the Superprestige series in Boom, Belgium, on Saturday and in round three of the World Cup in Bern, Switzerland, on Sunday.

Eli Iserbyt (Pauwels Sauzen-Bingoal) has emerged early as the man to beat this season, having won both World Cup rounds in the USA so far, and the opening race in the Superprestige series in Gieten, in the Netherlands, last weekend.

At the time of writing, Iserbyt had yet to be confirmed on the start list for the Boom round of the Superprestige on Saturday. Could he be keeping his powder dry in order to put everything into trying to win in Bern the next day? His closest rival in the World Cup, Telenet Baloise Lions rider Toon Aerts, is confirmed for both races, although the Belgian could only finish ninth at last weekend's Superprestige round in Gieten.

Whether Iserbyt is there in Boom or not, Aerts' teammate Hermans – second in Gieten – is in a position to pounce, trailing Iserbyt by a single point after the Superprestige opener.

Last week's winner of the women's race in Gieten, Ceylin del Carmen Alvarado (Corendon-Circus) lines up for both competitions on both days, as does second-placed Sanne Cant (IKO-Crelan), the reigning world champion.

On Sunday in Switzerland, they'll be up against Canada's Maghalie Rochette (Specialized-Feedback Sports), who won the opening round of the World Cup in Iowa City last month, and World Cup leader Katerina Nash (Luna), who went one better than her second place in Iowa to win round two in Waterloo the following week.

Cyclingnews will have the results from all of this weekend's elite cyclo-cross action.