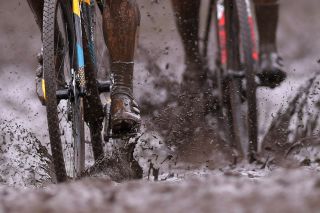 Kerry Werner and Rebecca Fahringer continue to lead the USA Cycling Pro CX Calendar after a busy week of racing in Indiana and New York.

Two C2 races on Saturday and Sunday at the Supercross Cup in Stoney Point, New York, drew the top elite men from the series, with Werner taking on Cannondale teammates Stephen Hyde and Curtis White, who won both days and closed to within nine points of the series leader. Werner finished fourth both days, with Hyde second the first day and third the next. Lane Maher was third on Saturday and second on Sunday.

The top-five series standings tightened, but the rider order didn't change, as Hyde is still third, now 181 points behind White. Gage Hecht and Tobin Ortenblad didn't compete on the Pro CX Calendar races but are still fourth and fifth overall, respectively, with Hecht 83 points behind Hyde and Ortenblad another 27 points back.

Fahringer had a successful outing at the Supercross Cup, winning both elite women's C2 races. The series leader beat Courtney McFadden both days, with Carla Williams third on Saturday and Ruby West making the final podium spot on Sunday.

Fahringer wasn't the only elite woman in the series to pull off the double win, however, as Clara Honsinger continued her rise through the domestic cyclo-cross ranks with two C2 wins at the Major Taylor 'Coss Cup outside of Indianapolis.

The 23-year-old beat Raylyn Nuss and Sunny Gilbert on Sunday, then topped the pair again the next day. Samantha Runnels was fourth both days. The effort lifted Honsinger to second overall in the standings, 93 points behind Fahringer. Caroline Mani wasn't active over the weekend and dropped from second too third, just three points behind Honsinger.

Maghalie Rochette also didn't race in the Pro CX Calendar over the weekend and so dropped from third to Honsinger's previous spot in fourth. Gilbert remains in fifth, 104 points behind Rochette.

The USA Cycling Pro CX Calendar continues next weekend with a pair of C2 races on Saturday and Sunday at the North Carolina Grand Prix in Hendersonville.