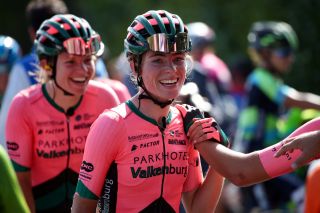 Demi Vollering has mutually ended her contract with Parkhotel Valkenburg one year early and has signed a new two-year deal with SD Worx for 2021 and 2022.

"I had a great feeling from the initial meetings with the team," Vollering said. "The SD Worx team management expressed their admiration and also outlined a clear plan for the next few years. This was something I could totally get on board with."

Vollering, 23, is a rising talent and surprised everyone last year with her top-ten finishes in the Amstel Gold Race, Flèche Wallonne and Liège-Bastogne-Liège, where she was third. She also won the Giro dell 'Emilia last year.

This year she was part of the winning breakaway at La Course where she finished in third place behind winner Lizzie Deignan (Trek-Segafredo) and runner-up Marianne Vos (CCC-Liv).

"Last year, was also a really good year, and then you need to see how it goes this year, and this year I’m already on a WorldTour podium, that’s really cool.

“I feel that I’m already a lot stronger than last year, but also tactically in the races, I feel that I am getting to know the riders better and better, that’s really nice. Now, I sprinted with Lizzie and Vos, and I didn’t sprint against them last year. In the future, when I sprint with them I know a little bit more what to do.”

Vollering said she would like to focus on both the Classics and major stage races such as the Giro Rosa, which is held this year from September 11-19, and the possible future women's Tour de France.

"The Giro Femminile will certainly be a challenge, and, of course, it's great that a Tour de France for women will be organised from 2022. I'm already looking forward to it," she said.

Director Danny Stem said that he see similarities between Vollering and Anna van der Breggen, who is set to retire from racing and become a sports directeur at the end of 2021.

"Over the next few years, we think Demi can grow into a rider who could follow in the footsteps of Anna van der Breggen," Stam said. "In the Classics, she has already proven her class, but she also has the potential to compete with the best in stage races."

"I'm very grateful to Parkhotel Valkenburg and the team for their trust over the past few years. I'm also delighted that the team helped to make this move work," Vollering said.

Vollering's early departure is the second this year, following the mid-season transfer of Lorena Wiebes to Sunweb in June.