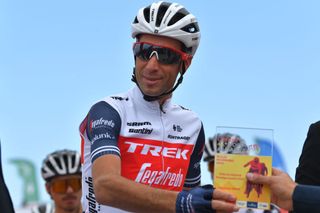 Vincenzo Nibali has confirmed that he will ride Paris-Nice in place of Tirreno-Adriatico, which has been postponed due to the restrictions imposed on sporting events in Italy to combat the spread of the Covid-19 coronavirus.

The Trek-Segafredo rider lines up for the Race to the Sun as part of an eight-man Trek-Segafredo team that includes Richie Porte, Kuurne-Brussel-Kuurne winner Jasper Stuyven and world champion Mads Pedersen.

"I decided with the team to be at Paris-Nice to keep the schedule leading up to the Giro d'Italia virtually unchanged. At the moment, it's important to put kilometres and days of racing in the legs," Nibali said in a statement on Friday.

"Given the situation in Italy, the change of calendar was practically mandatory. I'm very sorry I can't race in my country, and I hope that the situation will soon get better, regardless of the races."

RCS Sport this week confirmed the postponement of Strade Bianche, Tirreno-Adriatico, Milan-San Remo and the Tour of Sicily, while the GP Larciano, Trofeo Binda, and Settimana Coppi e Bartali have also fallen by the wayside.

Vincenzo Nibali: I'm still keen to race and up for a fight, age is just a number

Seven WorldTour teams – Jumbo-Visma, Ineos, Movistar, Astana, CCC, Mitchelton-Scott and UAE Team Emirates – have withdrawn from Paris-Nice, citing concerns about the risks posed by the spread of coronavirus in France.

In response, organiser ASO has allowed competing teams to field eight riders rathre than the usual seven, and has issued late wildcard invitations to Circus-Groupe Gobert and B&B Hotels-Vital Concept.

According to La Gazzetta dello Sport, Trek-Segafredo manager Luca Guercilena and coach Paolo Slongo will not travel to Paris-Nice, as they reside in Lombardy and the Veneto, respectively, the Italian regions with the highest number of coronavirus cases.

Giulio Ciccone has also been left out of the Paris-Nice team as he raced at the recent UAE Tour, where the final two stages were cancelled and the entire race was quarantined following a number of suspected coronavirus cases at the event.

"At Paris-Nice, my goal is to confirm the good impressions I had at the Ardèche and Drôme Classics and to make another leap in condition. The team is very strong and well-prepared, and I want to give my contribution," he said.

Nibali, Porte, Pedersen and the on-form Stuyven will be joined in the Trek-Segafredo line-up by Edward Theuns, Ryan Mullen, Kenny Elissonde and Alex Kirsch.

"Vincenzo will be our GC leader, and Richie will be targeting stages for us. The classics guys might have some opportunities in a breakaway, and we will try with Edward in the sprints. We will have to take it day by day to see the chances we have," said directeur sportif Steven de Jongh.

"We were able to add Ryan Mullen to the selection, and he will give protection to Vincenzo, which will be good practice for the Giro when Ryan will have the same role."

Paris-Nice gets underway in Plaisir on Sunday and concludes on the Promenade des Anglais on March 15. Although France has 577 confirmed cases of Covid-19, the French sports ministry gave the green light for Paris-Nice to go-ahead earlier this week.

"I'm happy that ASO did everything possible to make the race happen," De Jongh said. "They took a lot of measures to prevent the riders and staff from being in contact with crowds."