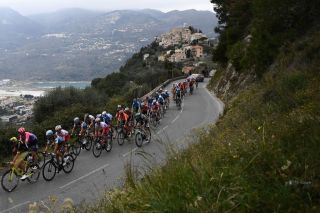 The 2019 edition of Paris-Nice. Several WorldTour teams have pulled out of the 2020 race. (Image credit: Getty Images Sport)
JUMP TO:

As the spread of Covid-19 coronavirus continues to force changes to the European spring racing calendar, teams and organisers alike have responded with alterations and cancellations.

An Italian government decree to suspend sporting events until April 3 has led to a raft of races in the country being cancelled. RCS Sport announced the cancellation of Strade Bianche on Thursday, following that move on Friday by cancelling Tirreno-Adriatico, Milan-San Remo and the Tour of Sicily.

A number of WorldTour teams had taken it upon themselves to withdraw from the now-cancelled Italian race, while several have also pulled out of races in France and Belgium, including Paris-Nice.

With the announcements and news coming in thick and fast over the past few days, it can be hard to keep track of who is doing what, so we've put together a team tracker so you can keep abreast of the latest developments.

The French team made the announcement they would withdraw from the Italian races on Thursday afternoon, with team boss Vincent Lavenu saying that he couldn't risk the health of his riders and staff.

"As team manager I cannot risk the health and integrity of our staff when the health situation is so unstable in Italy, and many legitimate questions have been raised within the team," he said.

"Sporting interests should not overshadow prudence and wisdom when it comes to public health. We are very sorry for the organisers of these legendary races, and we have informed them of our decision."

The Kazakhstani squad announced their withdrawal from racing for a period of 15 days on Thursday morning.

"With this measurement, we have chosen to protect the health of our riders and staff and to take our responsibility for the society in not further spreading the virus," said team general manager Alexandre Vinokourov.

"Of course, we would have preferred to participate in all upcoming races, but for now, it’s safety first. We still have a long season ahead with many other important races. It was not an easy decision, but we have to protect the cycling family as well as our own families at home."

The Polish team announced their withdrawal from the two WorldTour stage races on Thursday afternoon, with team manager criticising the UCI in the process.

"It was not a simple decision to withdraw from Paris-Nice, or Tirreno-Adriatico, which we expect to be officially cancelled in the wake of the cancellation of Strade Bianche," Ochowicz said.

"We wish to express our ongoing support for both the ASO and RCS. However, we stand disappointed with the lack of direction by the UCI at this critical moment in the sport as all men’s and women’s teams have been left to fend for themselves."

Team doctor Max Testa cited worries about a risk of quarantine and higher chance of infection at this time of the year.

"At this point in the season, instances of Upper Respiratory Tract Infections (URTI) and fever are high and it is inevitable that riders and staff will fall ill during the races," he said.

"Without a detailed quarantine plan, and rapid testing protocol and delivery of results, teams are actively putting riders and staff at risk of exposure, transmission, and quarantine.

"We also need to think about the risk of quarantine for our riders and staff when they return to their home countries from these races. For these reasons, we have decided to withdraw from Paris-Nice and Tirreno-Adriatico."

Following advice issued by the US federal agency, the Department of State, EF Pro Cycling were the first team to request a withdrawal from racing. The American squad sent a letter to the UCI and race organisers RCS Sport on Tuesday.

"We think it best to follow this advice and make all efforts to keep our staff and riders healthy and to help ensure they are not at risk of transmitting the virus," read the letter.

"We will work closely with you if there is a plan to keep these races safe now. And we are also open to rescheduling the races in the future.

Team general manager Jonathan Vaughters took to Twitter to praise the team's sponsors for allowing them to take the decision.

"While this was a tough call, we are happy to have an owner in EF that backs bold decisions," he wrote. "I listened. And learned. This isn’t about panic. This is about helping local medical efforts to slow spread. So they can keep up with demand. It’s not being afraid. It’s being responsible."

The team, which has several members quarantined in the UAE until March 14, cited a lack of available riders and staff as they pulled out of a trio of Italian races (two of which have since been cancelled).

Sprinter Arnaud Démare and promising climber David Gaudu are among those to have been quarantined.

"Lacking sufficient numbers of available riders and staff, partly due to the quarantine period observed in the UAE, our team regrets to announce its inability to take part in upcoming Strade Bianche, GP Larciano and Tirreno-Adriatico," read a team statement.

The Dutch squad, who had announced their withdrawals from Strade Bianche, Tirreno-Adriatico and Milan-San Remo before those races were cancelled, stated on Friday that they would also pull out of Paris-Nice.

Due to coronavirus health risks and "lack of adequate guarantees about procedures", the team's medical staff were of the opinion that they should withdraw from the French race.

"This hurts and is disappointing," said team director Richard Plugge in a statement issued by the team. “But this is the best decision we can make now. As management, we have the responsibility to weigh all risks carefully. They are now too large.

“Cycling has a unique character and travel and staying in hotels is inherent to the sport," he added. "That makes us vulnerable in this corona crisis. The health of riders, staff and the public now deserve every priority, taking into account circumstances that may arise such as quarantine, illness or hospitalization."

Mitchelton-Scott's announcement went further than most teams, with both men's and women's squads withdrawing from racing until March 22, with a decision to be made on the next period later on. The team outlined the reasons for its decision in a statement.

"We, as Team Doctors and the wider team, have a duty of care to protect health and wellbeing of all our riders and staff. We will not have any input into, or control over, the measures that race organisers may or may not put in place to manage the Covid-19 risks," read the message.

"We are a moving, international logistical puzzle, with staff and riders travelling between different countries with different health systems and strategies around Covid-19. Constant travel will increase the health risks and make management of logistics, potential quarantine periods, etc, extremely difficult.

"To withdraw any additional impact we as a team, either via illness or injury, may put on national and international health systems and hospitals.

"Whilst we have put in all the preparations and are eager to race, as an organisation we believe this is the best way to ensure we adhere to our duty of care to riders and staff, before returning to business as usual as soon as possible. "

Movistar pulled both of its outfits from racing until the week beginning March 22, the team announced on Friday morning. The move comes despite Paris-Nice organisers releasing a list of participating teams which included Movistar on Thursday.

"This choice, made after consideration of the advice given by the team doctors, takes into account of the current situation related to COVID-19.

"The Movistar Team, looking to preserve the health of all its members, as well as every person in touch with the sport of cycling, makes a decision which seeks to contribute, to the extent of its possibilities, to returning to a normal situation."

Ineos announced their intention to pull the team from all races on Wednesday evening.  Team principal Dave Brailsford said that the decision was made after the death of directeur sportif Nicolas Portal on Tuesday night, with coronavirus a contributing factor.

"We have taken this decision given the unique set of circumstances we are facing. This is a uniquely sad moment for everyone at the Team. We have lost someone we all loved very much and are all grieving for Nico.

"It is right for the Team given what has happened, but I also believe it is in the best interests of both cycling and the wider public.

"This pause will give us the time to grieve for Nico in private, to support each other at what is a very sad moment and to treasure the memory of a great and much-loved teammate and friend. We hope everyone will understand why this is so important to us."

Sunweb decided to withdraw both men's and women's teams from racing on Thursday, citing public health risks and the pressure that the Italian authorities are under as reasons for doing so.

"Team Sunweb has decided to withdraw both their Men’s and Women’s programs from the upcoming Italian races; Tirreno Adriatico, Milano Sanremo and Trofeo Alfredo Binda. Both the UCI and the race organiser have been made aware of the decision," read a team statement.

"The team makes this decision in light of the exceptional circumstances surrounding COVID-19. We acknowledge our responsibility to the areas in which we would travel, and the immense pressure that the Italian authorities are currently under in what is a fast-evolving, incredibly difficult situation.

"We have a duty of care to our riders and staff and to the wider communities in which we compete. This situation goes beyond cycling, and with this decision we as a team want to minimise any impact that we may put on these communities through potential illness."

UAE Team Emirates became the second squad with riders quarantined in the UAE to announce their withdrawal from select upcoming European races.

The UAE Tour outbreak started after two staff members were infected with the virus, while it is thought, though still unconfirmed, that star sprinter Fernando Gaviria has also fallen ill.

"Given the global health emergency situation, and in line with the recent decision to implement a voluntary quarantine for the team involved in the UAE Tour, the Emirati team will suspend the competitive activity for Paris-Nice, Tirreno-Adriatico and Milan-San Remo races.

"At the end of this period, depending on the current situation, a return to competition will be assessed."