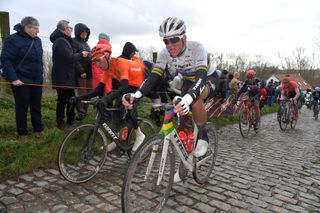 After a quiet start to his season in the rainbow jersey in Australia, Mads Pedersen arrived in Belgium for Opening Weekend for the sort of races on which he's basing his career. Yet the world champion had a quiet time for the season's first cobbled Classics, finishing 66th at the Omloop Het Nieuwsblad and 79th at Kuurne-Brussel-Kuurne.

The Dane was somewhat overshadowed by his Trek-Segafredo teammate Jasper Stuyven, who won the Omloop in style before placing fifth at Kuurne.

With the Tour of Flanders and Paris-Roubaix still a month away, Pedersen still has time to work himself towards top form, and it's the same for his career as a whole. The rainbow jersey comes with its glaring spotlight, but Pedersen, who only turned 24 in December, knows he's not yet the finished article.

"Everyone thinks the stripes make you 100 times better, but they don’t," Pedersen told Cyclingnews during Opening Weekend.

Mads Pedersen: I'm still hungry and this is just the beginning

Mads Pedersen extends with Trek-Segafredo through 2022

"I still have something to learn, I still have to grow in those races. I'm not taking a huge step up from last year to this year."

The Dane, who finished runner-up on his Tour of Flanders debut in 2018, also had no problem in admitting he's not necessarily at the top of Trek-Segafredo's Classics hierarchy.

"Jasper showed again on Saturday that he's still a better rider than me in races like this right now. That's how it is. We're racing together, not against each other, and if he wins, I'm also happy.

"Of course, I want to win races, too – that's why I'm a bike rider, and that's why I won the Worlds. At the Omloop, I wasn't good enough and Jasper won. That's how it is. I'm just happy he won; I'd be happy if Edward [Theuns] won or [Alex] Kirsch won. Right now, we have to grow as a team. We started well and we have to keep going now. For me, of course I want to win, but that's not because of the jersey – it's because that's how I am."

In terms of his own condition, Pedersen had no real concerns.

"It's where it should be right now. My biggest goal was not this weekend so I'm not at 100 per cent yet, but I'm pretty sure that after Paris-Nice I will be 100 per cent and ready for the next period of Classics.

"I'm happy with the shape and the form to show I can still be there. OK, I wasn't there in the last 40km on Saturday, but also I didn't eat enough and ran out of gas. I'm happy right now."

As for the team as a whole, the 24-year-old made no bones about the fact that last year was nowhere near good enough. John Degenkolb finished on the podium at Gent-Wevelgem, but otherwise it was a spring in which all of Trek's Classics riders underperformed.

Thanks to Stuyven, however, they have made a strong start to the 2020 campaign, and Pedersen insists a page has been turned.

"It was pretty nice for the whole team but especially Jasper. He really deserved to get that win, and to show that after last year – which was, let's say, a fuck-up for us – we're back on track and doing well again," he said.

"What changed? The mentality. Last year, after E3, we sat down and we, the riders, told all the staff that we actually were sorry for being that bad. The day after we did a good race in Gent, but then it was bad again from then on.

"To be honest, we don't know what happened, but right now we think it was the mentality of last year. It's way better this year. Everyone's just happier and more relaxed, and ready to race. You can see that with how we've been racing."