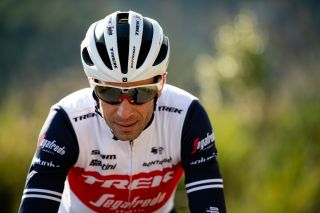 Vincenzo Nibali has dismissed age as 'just a number', saying he still has the same motivation and desire to race as he when he was a boy growing up in Sicily.

The Italian turned 35 in November as he closed the door on his often difficult time at Bahrain-Merida and began a new chapter of his long career with Trek-Segafredo. He pinned a race number on his red and white Trek-Segafredo jersey for the first time on Wednesday morning before the start of the Volta ao Algarve, starting the 16th season of his professional career.

Nibali has won all three Grand Tours during his career and has the Giro d'Italia, Tokyo Olympic road race and the World Championships in Switzerland as major goals for 2020.

"If I look back I can see a lot things. I'm not a Highlander but I don’t feel old at all, age is just a number. I'm still keen to race and up for a fight, as I was as a boy. That's why I'm still here," Nibali told La Gazzetta dello Sport, keen to put the long hours of a recent altitude training camp behind him and start racing.

"Starting a new season feels like I'm back in a routine but that's no problem. I don’t want to train anymore, I want to get racing. Racing is a lot better than training! Winter is coming to an end, I've clocked up a lot of kilometres, other people have already started racing, so I'm really keen to get going too."

Evenepoel is just 20, Van der Poel is 25 and a new generation of young riders are emerging after teams preferred to invest in young talent. Nibali knows he is part of an older generation but believes he has found a balance between the needs of racing and his private life.

"When you're young you can focus entirely on your riding. At 35, there's a lot more going in your life, including your family and children. The hardest thing is finding the right balance. I know I've got to take things step by step and focus on the here and now. I'm not thinking about where I'll be in two years' time."

Nibali has sacrificed pre-season time at home in Lugano for a training camp on Mount Teide, revealing he clocked up 1,348km, 48 hours in the saddle and and 31,594m of climbing during the 12-day block.

"I think my form is pretty good, but until you click in for a race, you can never really know. I want to compare myself against everyone else because I know I've worked hard. I'm optimistic and relaxed," he said.

"I feel I've started off the year better than last year. The team have given me the support I needed and we've trained in the warmth, in Sicily in December and then in Mallorca before Teide. It rarely rained in Lugano this winter and so I don't think I've missed a day of training. Last year was different. I was coming back from the vertebrae injury I suffered at the 2018 Tour de France and your body needs time.

With Nibali due to target the Tokyo Olympic Games, he is naturally aware of the possible impact of the coronavirus.

"It's slightly worrying. We've added some things to our medical protocol in the team, such as washing our hands more and not touching our faces. I also used a face mask when I travelled to Tenerife. I was struck by the cancellation of the Tokyo Marathon. For the Games we'll have to see how things evolve," he said.