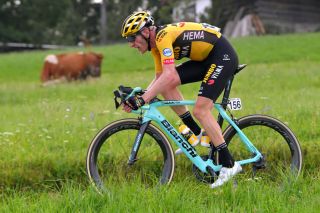 The spate of accidents and crashes that have befallen professional cycling since the recommencement of racing following the shutdown of competition due to the coronavirus pandemic has led to a number of calls for race organisers and the UCI to improve standards. Jumbo-Visma's Jos van Emden has now made 10 suggestions in the Dutch media in the hope of making things safer.

Earlier this week, Deceuninck-QuickStep's Michael Mørkøv decried the professional riders' association, the CPA, as a "worthless organisation" when it came to improving rider safety.

"I don't know what the CPA is. I believe they're in partnership with the UCI, because the UCI created it," the Dane told Cyclingnews following stage 2 of the Tour de Wallonie on Monday. "I know there are some people there doing some things but they never seem to do anything that you can actually see happening. They have no power to change anything, so it's a worthless organisation."

Now, Van Emden has been similarly disparaging of both the CPA and the sport's governing body, the UCI, when it comes to safety.

"On paper there is a riders' union, but in practice they do nothing for us," the 35-year-old wrote in a column for the Algemeen Dagblad on Wednesday. "They are a bunch of puppets. They are paid by the UCI and do what the UCI wants them to do. I hardly know any riders who support the board of the CPA. If something goes wrong, they call for an investigation. You will never hear about that again. There are initiatives from the riders to implement changes or to come up with a new union, but we are being opposed from all sides.

"The UCI is not concerned with the safety of the riders. It appears that they are to the outside world, but don't look at their own mistakes and shortcomings," he continued. "If they do come up with adjustments and rule changes to improve safety, it will take years.

"It's not that hard," Van Emden said. "There are plenty of measures you can come up with that you can implement immediately."

The Dutch Jumbo-Visma rider – who's a teammate to the likes of Primoz Roglic, Wout van Aert and Tom Dumoulin – came up with the following 10 suggestions:

"A committee of ex-riders is appointed to approve the course at every race. Even if it was only the last five kilometres, that would make a big difference. They could reject courses without being accountable to the UCI."

"The 3-kilometre rule [whereby if there's a crash in the last three kilomtres of a stage, all riders get the finish time of the group they were in when the crash occurred] should always apply on flat stages. The time is taken three kilometres from the finish so that classification riders and their teammates do not have to sprint [against stage contenders] right before the finish line."

"Race organisations are obliged to publish their road book and the exact route a number of weeks (preferably months) in advance. Now, it often only happens a week before the race."

"I won't even mention downhill finishes, such as the one at the Tour de Pologne [where Deceuninck-QuickStep's Fabio Jakobsen crashed into the barriers on the finish line]."

"In the last few hundred metres, there should be air cushions along the side of the road, like in ice skating. That should become standard at WorldTour competitions. When not in use, they could be used on smaller races, so that the WorldTour also contributes to safety at lower levels."

"Banners may only hang over the road if they can handle the width of the road. If they have to be partly on the road, even if only four inches, they should be hung next to the road. As things are now, we often have to avoid poles and ropes that are on the road or hang over it."

"No more radio connections between the sports directors and the riders. It makes the racing very unsafe because many directors shout that their riders must go forward, even if it's not actually necessary. The riders could instead just be in contact with the race jury car, which could report problems and or mechanicals."

"There could be a system of yellow and red cards [like in football], which would be given when riders break the rules. The same punishment for the same crime, not the arbitrariness that now prevails."

"Every course needs motorcyclists to secure the race. They block roads, wait for us to pass, and often overtake us. That's important work. But sometimes overtaking is irresponsible. I would like them to each wear a large number so that we could report any problems afterwards."

"Any rider who cycles on bike paths or sidewalks is immediately disqualified.

"These 10 points are not sacred," Van Emden added in his Algemeen Dagblad piece. "There are probably more or better measures to come up with. But it is a start. Implementing them would not take much time or money.

"Cycling is the best sport there is. It's also a dangerous sport that carries risks. But that does not mean that we have to accept all risks just like that," he said. "We want a voice, especially when it comes to safety. We are the ones who risk our body and limbs every day. We want a real trade union; we want real measures to remove unnecessary risks from our profession.

"We are cyclists, not circus animals," concluded Van Emden.