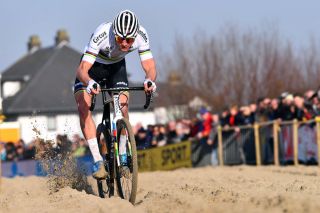 The 2019-20 Superprestige cyclo-cross series could be about to kick into a new gear with the return of Mathieu van der Poel (Corendon-Circus) to the discipline for round 4 of the competition in Ruddervoorde on Sunday.

Sanne Cant out of Friday's Koppenbergcross, unlikely for Sunday's Superprestige race in Ruddervoorde

The Dutch two-time elite world champion has had almost a month off racing having brought the curtain down on a busy season of road racing, and should be ready to give the likes of World Cup leader Eli Iserbyt (Pauwels Sauzen-Bingoal), Toon Aerts and Aerts' Telenet Baloise Lions teammate – and overall Superprestige leader – Lars Van der Haar a run for their money at the Belgian race this weekend.

Friday's Koppenbergcross – the opening round of the 2019-20 DVV Trofee – should give some indication of form ahead of Sunday's race, although neither injured women's world champion Sanne Cant (IKO-Crelan) nor Van der Poel will race there.

Meanwhile, Van der Haar tops the men's classification thanks to his consistency over the opening three rounds. He will be looking for his first victory in the series to consolidate his lead with teammate Quinten Hermans a single point behind him.

Van der Poel, who is starting from scratch, points-wise, in round 4 of the eight-round series, has a borderline impossible task to win this year's Superprestige title – which he's won four times in the last five years, including last year. But make no mistake that if anyone can, the Dutchman can. Winning all five remaining rounds is well within his capabilities, starting this Sunday.

"Yes, I want to win right away," Van der Poel said earlier this week. "I think that, in cyclo-cross, I can't compete with anything other than the intention to win races."