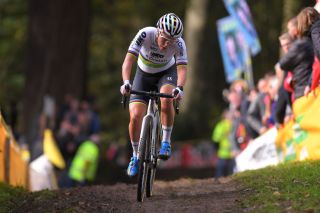 World cyclo-cross champion Sanne Cant (IKO-Crelan) will not start at Friday's Koppenbergcross – the first round of Belgian cyclo-cross series the DVV Trofee – due to a back injury, according to reports in the Belgian press.

Cant crashed while warming up for round 3 of the Superprestige series in Gavere last Sunday, injuring her sacrum – the bone at the base of the spine, which connects to the coccyx, or tailbone.

Although the 29-year-old, who was leading the cyclo-cross series after two rounds, still raced, she could only finish 14th, slipping down the rankings to fifth overall, and is now also looking likely to miss round 4 of the Superprestige in Ruddervoorde, in Belgium, on Sunday.

According to nieuwsblad.be, doctors have tried to fix Cant's shifted sacrum, but have told her that she won't be ready to race at the Koppenbergcross in Oudenaarde, Belgium, on Friday.

Corendon-Circus star Mathieu van der Poel, meanwhile, is expected to make his return to the discipline at round 4 of the Superprestige series in Ruddervoorde on Sunday.