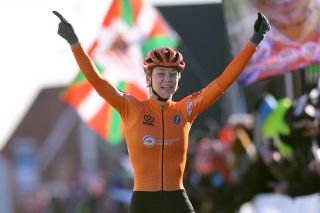 After being forced to sit out the Dutch National Championships road race in Drenthe on Saturday because of a positive COVID-19 test, Inge van der Heijden took to Instagram to announce a re-test had come back negative and raised questions about the reliability of the PCR tests.

“I tested negative on Friday last week,” Van der Heijden confirmed. “And although I did not show any symptoms of infection, to my great disappointment I suddenly tested positive on Wednesday. In consultation I decided to have an extra PCR test done yesterday and the result was negative again. As I expected, actually.”

Now, the U23 cyclo-cross world champion says she will respect the quarantine but has concerns about the rest of the season.

"This is about the national championships on the road and as a cyclist that is not the most important thing, but I am worried about the next 'cross season when it comes to classification races, because if you miss one 'cross, your classification will quickly go to waste."

The stakes are even higher for riders racing in the upcoming Tour de France: protocols dictate that if two riders in the same team test positive, the entire team will be forced to withdraw.

The PCR test is generally believed to be very reliable with a low false positive rate (confirming someone has the virus when they are actually not infected). However, because the test amplifies minute traces of genetic material from the virus, any amount of cross-contamination during sample collection or processing could result in a false positive.

A negative follow-up result would support a false-positive of the previous test.

The PCR test is also subject to missing an infection, or false-negative results, if a patient is too early in the infection and has yet to produce enough viral particles to be detectable but Van der Heijden says she has had no symptoms.

The positive test on Wednesday led to Van der Heijden's teammates Yara Kastelijn and Aniek van Alphen to withdraw from the championships because they had done a reconnaissance ride with Van der Heijden.

Similarly, Team Ineos withdrew its riders from the Italian championships after Leonardo Basso tested positive for the virus after going on a reconnaissance ride with teammates Filippo Ganna, Gianni Moscon and Salvatore Puccio.

Van der Heijden is not the first cyclist to have a false positive test: Omer Goldstein (Israel Start-Up Nation) tested positive for coronavirus and the result led to him and two teammates being withdrawn from Vuelta a Burgos in July, but the result turned out to be a probable false-positive after his reanalysis came back negative as did tests on his teammates.

Other riders who have tested positive for COVID-19 without any symptoms include Hugo Houle (Astana), Larry Warbasse and Silvan Dillier (AG2R La Mondiale).

Dillier's subsequent tests came back negative and he questioned the coronavirus protocols, telling the Swiss paper Blick that he's the "healthiest person on earth" and what happened to him was "not correct".