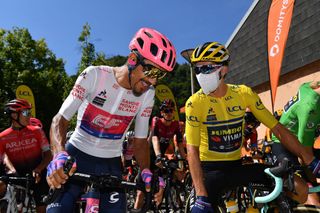 If two cases of COVID-19 are discovered in a team at the Tour de France, the whole team and staff will be removed but the race will continue.

As the days countdown to the Grand Départ in Nice next week, Tour de France organiser ASO has confirmed that strict decision and explained its COVID-19 medical protocol to the 22 teams, with French law and COVID-19 rules the basis for the latest race protocol.

France revealed there had been 4,771 new cases of COVID-19 on Thursday, the highest increase since the end of the French lockdown in May. Hospital and intensive care admissions remain stable due to a lower average age of the cases as well as the lesser impact of the virus on young people.

French president Emanuel Macron suggested a second national lockdown would not happen but local authorities are tightening restrictions. Face masks are now obligatory outdoors in Nice, where the Tour de France is due to hold the opening two stages next weekend. The Alpes-Maritimes department where Nice is situated has one of the highest COVID-19 case number in France, with 59.8 cases per 100,000 population and three per cent of all tests returning positive.

Lappartient: I remain optimistic that the Tour de France will go ahead

So far only four riders are known to have tested positive for COVID-19 since the restart, with only Hugo Houle of Astana testing positive after competing at the Tour de Pologne. Israel Start-Up Nation's Omer Goldstein tested positive before the Vuelta a Burgos. Finally, AG2R La Mondiale have suffered two positive tests – Silvan Dillier a late withdrawal from Strade Bianche, and Larry Warbasse on Friday morning.

However the Tour de France looks set to go ahead, with preparations continuing. In a recent interview with Cyclingnews, UCI President David Lappartient confirmed that the Tour de France would continue if COVID-19 cases emerge in the team protective bubbles.

"A race will not stop if there's one positive case, even if nobody knows if the race will go on to the end," Lappartient revealed to Cyclingnews.

"Of course, any rider who tests positive in a race will go out of the race. Then we need to check the contact cases, those who had close contact with the rider, following the World Heath Organisation rules. Maybe some of them will have to leave a race, too."

According to reports by Velonews and Het Nieuwsblad, the Tour de France protocol states that if two cases of the COVID-19 emerge in a team, the whole team – eight riders and 30 staff, will be removed from the race. However with each team living in isolation in hotels during the race and riding in a peloton not considered a major risk of further contamination, the Tour de France will, in theory, go on.

"If two persons or more from the same team present strongly suspect symptoms or have tested positive for COVID-19 the team in question will be expelled from the Tour de France,” the document from ASO reportedly reads.

"Its riders will not be authorized to start the Tour de France (or the next stage) and the team’s personnel will have their accreditation withdrawn."

Two directeurs sportifs who will be on the Tour de France confirmed the two-strike rule to Reuters news agency, who reported that ASO refused to comment.

The UCI created a stringent COVID-19 protocol for the return to racing and teams have also create internal protocols to further limit the risk of contagion within a team.

The UCI protocol obliges teams to undergo two tests before they go to races, sets rules on protective distancing between those in the protected team bubbles and the rest of the race caravan and explains what happens if a COVID-19 case emerges during races. The UCI and race protocols must respect any local authority rules on the control of COVID-19.

Race organisers have to nominate a COVID-19 doctor who manages any cases with team doctors. A risk assessment is carried based on local case information and riders have to complete a health questionnaire every day, usually via a dedicated app, to spot possible COVID-19 symptoms. Teams will sleep in separate wings of hotels and most have created mobile kitchens and dining facilities to avoid contact with other guests.

Some teams struggled to complete their pre-race testing protocol early on but there will be a mobile testing facility at the Tour de France, with rider and staff also tested on each rest day on September 7 and 14.

According to the Tour de France protocol, teams can replace any riders who test positive, with a final deadline of 10am before the first stage on Saturday August 29.

As we have already seen at races, riders have to wear face masks when they sign-on at race starts and post-race when they travel to the bus or speak to the media, who also have to respect strict medial rules but who remain outside of the team bubble.

Autographs and selfies are no longer permitted, with ASO limiting the number of people at stage starts and calling for roadside fans to also wear masks.

"I remain optimistic that the Tour de France will go ahead," Lappartient told Cyclingnews at the Strade Bianche races in Italy.

"Of course, zero risk doesn't exist; we could have a big cluster in Nice or a fast second wave. I follow things closely with the race organisers and so, I'm optimistic the Tour de France will take place."