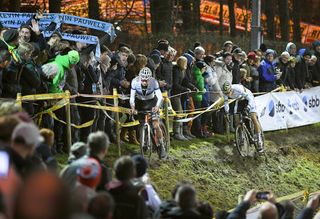 In an attempt to shift the World Cup to a more international series, the UCI has limited the number of events to be held in the historical heart of cyclo-cross, Belgium, to a maximum half of the 14-16 races in the series.

Flanders Classics has taken over organising the World Cups, which will only briefly visit the United States with Waterloo, Wisconsin opening the series on October 4. The calendar omitted Iowa City, which hosted World Cup rounds for the past two seasons.

"We are disappointed that Flanders Classics, new owners of the UCI Cycle-Cross World Cup Series, did not select Jingle Cross and Iowa City to host a round of the 2020-2021 World Cup," Jingle Cross organiser John Meehan said. "In early conversations with Flanders Classics, they shared their vision of the World Cup which has a more European focused schedule and a very brief North American presence. Ultimately, they decided only one World Cup would occur this year and awarded that World Cup to our friends and colleagues at Trek in Waterloo.

"Jingle Cross will celebrate its 17th edition this coming October 9-11, 2020 with three full days of UCI C1 and C2 races plus fun events for the entire family. We will continue our all volunteer non profit tradition with all proceeds once again donated to the University of Iowa Stead Family Children's Hospital. We wish the UCI and Flanders Classics all the best for the upcoming World Cup season."

Zolder will continue to host its race on Boxing Day but moves to the Superprestige series along with Gieten, Ruddervoorde, Niel, Boom, Gavere, and Middelkerke. A new venue in Merksplas replaces Diegem.

The UCI's plans have come under intense criticism, with some team managers saying it would kill the Junior and U23 categories and development in general because riders would spend more time racing in national team kits.

"What do the teams think of the fact that their youngsters will wear a national outfit every Sunday instead of their team outfit?" Telenet-Baloise manager Sven Nys said in October. "Teams are no longer going to want to invest in the development of young riders."

But the UCI has limited the number of events for non-elite categories to seven - with Dublin, Tábor, Besançon, Namur, Diegem, Villars and Hoogerheide holding both U23 men and men and women's junior events.

Additionally, the UCI will now increase funds to assist National Federations in bringing non-elite riders to the series. Previously, organisers provided financial incentives for Junior and U23 Men, but the UCI said it would extend compensation to all youth categories from next season.

The UCI also approved Professional Cyclo-cross Teams as distinct entities "to both facilitate the participation of cyclo-cross specialists and their teams in road events and to afford more visibility to the sponsors investing in these teams". These specialist pro teams would also be able to participate in road events from January 2021.