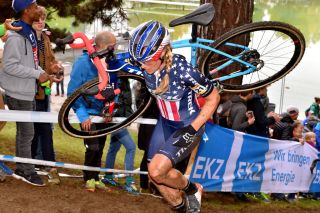 US cyclo-cross champion Katie Compton shoulders her bike during round 2 of the 2019/20 UCI Cyclo-cross World Cup in Bern, Switzerland (Image credit: Getty Images)

Retired two-time cyclo-cross world champion Sven Nys continues to speak out about world governing body the UCI's proposed changes to the format of the discipline's World Cup competition, reiterating on Sunday at the third round of the Superprestige series that the teams and riders haven't been consulted.

Teams organisation rails against UCI for 'taxation without representation'

The current nine-round World Cup runs from mid-September (with the opening two rounds in the USA) until late January, while the proposed new competition – effective for the 2020/21 season – would have 16 rounds compressed between October 11 and January 24, with races every Sunday.

Flanders Classics – the organisation behind some of the most famous Belgian one-day road races, including the Tour of Flanders, the Omloop Het Nieuwsblad and Gent-Wevelgem – have been engaged by the UCI to organise the 2020/21 cyclo-cross World Cup.

"And what do the teams think of the fact that their youngsters will wear a national outfit every Sunday instead of their team outfit?" Nys asked, referring to the fact that the junior men and women represent their nations, rather than their trade teams, during World Cup competitions. "Teams are no longer going to want to invest in the development of young riders.

"Why is there so much uncertainty?" he added. "The race organisers are in the dark, and the teams and riders were never consulted."

In response, Van Den Spiegel said that the calendar of races and their locations would be announced in January or February 2020, and that the teams were involved in the reforms.

"In that case, I – as the Telenet Baloise manager – would know, and yet I haven't heard anything," said Nys, who won the cyclo-cross World Championships in 2005 and 2013, took the World Cup title six times between 2000 and 2009, and was the elite Belgian cyclo-cross champion nine times.

A number of riders, including US cyclo-cross champion Katie Compton and Britain's under-23 world champion Tom Pidcock (Trinity Racing) were also asked their opinions by hln.be at the Beringen cyclo-cross on the weekend.

"I don't like it. It's too many races," Compton told hln.be. "We're going to have more Benelux [Belgium, the Netherlands and Luxembourg] countries and not worldwide countries. When you have 16 races in a World Cup, you can't logistically travel and spend that much time in Europe. It's going to be like with our American baseball, where you have a World Series with one country. It's going to be a World Series with Belgian and Dutch riders.

"I think some of the other series' races are going to suffer from it, so I don't know if I like it," she continued. "Granted, we need to experience it to see if it works or not, but my initial reaction is that I think it could be better."

Asked whether she was prepared to base herself in Europe for the duration of the competition, Compton added: "Luckily, 'cross season isn't that long, so it's going to be October through January, probably, so it's not too bad, at least for me. But I think for some other riders, coming from other countries, or who are in the first one or two years in the sport at the top level, they're going to really struggle

"So it's tough, and I think there's a better way, but we need to figure out how to do it," she said.

Pidcock, meanwhile, admitted that most of what he knew only came from what other riders had told him.

"Sixteen races, and it sounds like they're selling to the highest bidder, so I don't think it's a good thing, no," he told hln.be, but said that he could understand the excitement surrounding a possible round of the World Cup in the UK.

"It would be really nice, and I think at Milton Keynes last time it was really well received," he said, remembering the round of the 2014/15 World Cup that was held in the town in Buckinghamshire, England, where Belgium's Sanne Cant just pipped Compton to win the elite women's race and Kevin Pauwels came out in top in the men's race.