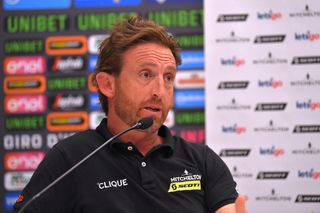 Mitchelton-Scott head sports director Matt White says that team owner Gerry Ryan's commitment to back the Australian men's and women's WorldTour squads for at least the next two seasons, following the aborted sponsorship takeover by Spanish project the Manuela Fundación, has "steadied the ship".

Last month, it was reported that the Manuela Fundación would take over from the Ryan-owned Mitchelton winery as main sponsor, but, less than a week later, Ryan announced that the deal was off following a disagreement over the terms of the contract.

Speaking on the SBS Cycling Central Podcast on Wednesday, White admitted: "There were a couple of weeks there – with the story from the Manuela Foundation – when there were a lot of questions that we had about that foundation.

"It was a bit of a shaky period; we didn't know anything about the sponsor, anything about the guy [Francisco Huertas]," he said. "It's a foundation that doesn't exist yet, but the big steadying of the ship was the commitment from Gerry for two more years.

"Everybody in the organisation, young or old, knows that when Gerry says something, it happens," continued White. "Once everybody knew that, there was no way we'd be carrying any negativity into the second part of the season or the future.

"I think you'll see in our [men's] team and the women's team a very similar line-up for the next few years," he added. "There won't be many changes with staff or riders, and we're looking forward to be getting back on the road and winning again."

One resulting upheaval from the episode was that Mitchelton-Scott general manager Shayne Bannan has left the team, having played a major role in the negotiations with the Manuela Fundación coming on board as the new title sponsor. Bannan will be replaced in the role by Brent Copeland, who moves over from Bahrain McLaren.

"I know him [Copeland] – we weren't close or anything – but it's a small Anglo community [in professional cycling], and he's renowned as a smart operator," White said. "I think he's going to be a great fit in our team. I've had a lot to do with him in the last few weeks."

On Wednesday, the team unveiled its long lists for this year's Tour de France and Giro d'Italia, and White said in a press release that Mitchelton-Scott would be pursuing stage victories – rather than targeting the general classification – at the Tour, while Simon Yates will go after the GC at the Giro.

"After the success of last year, we want to chase stage wins at the Tour de France. We rode an aggressive style of racing last year and we want to continue in that vein this year," he said in the press release.

Now, White said, everyone's excited to get back into the racing when competition restarts in earnest later this month.

"We know that the virus is still here; it's not going anywhere in the near future," White told the Cycling Central Podcast. "We're hoping that it can stay under control enough that we can get at least this season – weird season that it is – finished in a very intense, three-month block, and stay safe."

SBS also asked the former pro rider about the recent news that four-time Tour de France winner Chris Froome will leave Team Ineos at the end of the season to join Israel Start-Up Nation, leaving a question mark over whether Froome will still be selected by his current team for this year's Tour.

"I know one thing: all Team Ineos care about is winning the Tour de France," said White. "They're certainly quite good at removing emotion from their decisions, and I think it will depend on how Chris Froome's coming back into racing.

"I wouldn't be surprised if they did leave him out. I think three leaders does complicate things. It's going to be a tricky one to manage because you've got the last three winners of the Tour de France all in the same team: Froome is trying to get that elusive number five, Geraint Thomas won two years ago, and was solid last year in a Tour that was altered in the final week, and then Egan Bernal is the next star of our sport.

"Someone's got to work, and when you've got three leaders in a team like that, it's going to be a tricky one to manage. Two leaders is possible," said White.