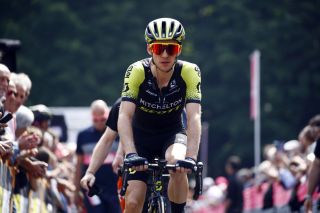 Adam Yates and Esteban Chaves will lead the line for Mitchelton-Scott at the Tour de France, while Simon Yates will skip La Grande Boucle in order to prepare for the Giro d'Italia.

The Giro and the Tokyo 2020 Olympics were the centrepiece of Simon Yates’ season before the campaign was interrupted by the coronavirus pandemic. The Olympics have been postponed to 2021, but he will stick to his original plan of riding the Giro despite a rescheduled calendar where the corsa rosa (October 3-25) is now preceded by the Tour (August 29-September 20).

Heads sports director Matt White suggested that the team’s primary focus at the Tour de France would be on chasing stage wins, despite the presence of Adam Yates, who placed 4th overall in the 2016 Tour, and Chaves, who finished on the podium of both the Giro and Vuelta a España that same year.

"After the success of last year, we want to chase stage wins at the Tour de France. We rode an aggressive style of racing last year and we want to continue in that vein this year," White said.

"We’re reconning certain stages now. The difference this year, starting in Southern France, is that it’s a tough first week climbing-wise and it’s not just for the sprinters. I still think it’ll be hard for breaks to succeed in that first week but by the time we exit the Pyrenees on stage 10, that’s where it’ll be more aggressive and there’ll be more chances for breakaways to go to the line because you’ll have your first selection in the GC sorted."

"The stacked GC field can affect stage opportunities, but it can also create opportunities," White said. "It’s no secret the strongest squads are Team Ineos and Jumbo-Visam but once the GC is stabilised, there’ll still be opportunities because no one wants to control the Tour de France for 20 days; you just have to pick the right moments."

At the Giro, meanwhile, Mitchelton-Scott’s focus will be on the overall ambitions of Simon Yates, who led the race for two weeks in 2018 before losing the maglia rosa on the dramatic stage 18 to Bardonecchia. The 27-year-old went on to win that year’s Vuelta a España, though he had to settle for 8th overall when he returned to the Giro in 2019.

Like Simon Yates, Jack Haig, Damien Howson, Lucas Hamilton and Andrey Zeits will all miss the Tour in order to form part of part of a strong climbing core at the Giro.

"The focus for us at the Giro d’Italia will be to support Simon Yates as best as possible, to help him achieve the optimal result we can as a team and ultimately try to win the race," White said.

"For me, the Giro d’Italia is the most physically demanding Grand Tour, so having a strong team around you certainly makes a difference.  The team we will send will be a deep one and I’m confident Simon will have great support across all facets of racing."

Brent Bookwalter and Chris Juul-Jensen have been named to the Mitchelton-Scott long lists for the Giro and the Tour, though White does not see many riders combining both Grand Tours given that they fall just over two weeks apart on the revised calendar.

"There will be only a few riders who will double up with the TDF/Giro combo this year and there certainly won’t be any GC riders at both. This will have an impact on the make-up of the field on the start line in Sicily," White said.

"I am also very curious to see how the weather affects the race. In the normal May time slot, the threat of average weather is always lingering, especially in the high mountains, but we could see less erratic conditions in October."

Earlier this year, Simon Yates said that he was inspired to ride the 2020 Giro in part because it fitted neatly with his plans for the Tokyo Olympics. Following the interruption of the season due to the COVID-19 pandemic, Yates said that he was "open to anything" on the revised calendar, but he has ultimately opted to target the Giro.

"The extra month will also give riders a chance to do more racing coming in, so it will mirror a more traditional Grand Tour build up," White said.

Mitchelton-Scott have undergone a management restructure during the hiatus from racing, with Shayne Bannan and Alvaro Crespi departing the squad to be replaced by Brent Copeland and Darach McQuaid. The move followed the news that team owner Gerry Ryan had opted not to proceed with the sale of the team to Spanish businessman Francisco Huertas in a move that would have seen the squad rebranded as Manuela Fundación.