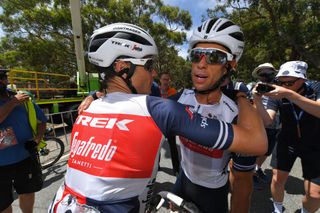 Beyond the summit of Willunga Hill, the contrast in emotions at the Trek-Segafredo and Mitchelton-Scott team vans was dramatic. With no team buses, there was nowhere to hide the raw post-race emotions.

The Australian team started the race with Daryl Impey in the leader's jersey but ended the day defeated as the South African cracked and Richie Porte surged away to seal overall victory. Trek-Segafredo didn’t win the stage but Porte won the overall for a second time. Impey slipped down to sixth overall at 30 seconds. Simon Yates was unable to stay with Porte and finished seventh overall at 37 seconds.

The silence as the circle of Mitchelton-Scott riders recovered and changed was only broken by the celebration of the Trek-Segafredo riders. Destiny parked the two rival teams next to each other on the decisive day of the 2020 Tour Down Under.

Trek-Segafredo directeur sportif Kim Andersen praised each of his riders as they arrived, hugging them and swapping happy high fives.

Tour Down Under Stage 6 – Live Coverage

On paper, the Trek-Segafredo line-up, with neo-pros Michel Ries and Juan Pedro López, world champion Mads Pedersen, Koen de Kort, Kiel Reijnen and Kenny Elissonde was weaker than Mitchelton-Scott. The Australian team had Simon Yates as a second leader, with Jack Bauer, Luke Durbridge, Lucas Hamilton and Cameron Meyer to do all the hard work. But Andersen had Porte and his superb climbing ability as the ace in his hand.

Mitchelton-Scott bossed the race all week as Impey chased time bonuses and built his slim two-second lead. They perhaps knew it was not enough and so tried everything they could to topple Porte on the final stage, even refusing to accept their responsibility as race leader and so chase the 26-rider break of the day.

Trek-Segafredo had to step in and lead the chase when the gap extended towards five minutes, hoping they could eventually reduce the gap and that Porte could again produce a superb performance on Willunga Hill.

Pulling it off after three hours of tension in the team car was huge satisfaction for directeur sportif Kim Andersen.

"Today was a really hard battle. I didn't expect that the whole peloton would be against us and Richie. Mitchelton-Scott played the game, but in a way, they lost, no? Because we took it all, or almost," Andersen told Cyclingnews.

Andersen played down any rivalry but was clearly happy to have won the Tour Down Under and to have defeated Mitchelton-Scott in Australia.

"It's a game, it's a race. Everybody does what they think they should do," he added, insisting there was nothing personal against Mitchelton-Scott. It was just bike racing, nothing personal.

Mitchelton-Scott directeur sportif Matt White sportingly congratulated the Trek-Segafredo riders and Andersen as he walked towards his own riders to console and praise them. White has celebrated numerous victories at the Tour Down Under and around the world but this year's defeat seemed to hurt a little more.

"Look it’s disappointing, Daryl was five seconds off finishing second place. He saw how stacked up it was between second and fifth and we came up a little bit short. But I'm very; very proud of the way the boys rode this whole week. We rode a tactically very smart race. It just wasn’t good enough to match Richie when he went on the climb today," White said.

White insisted, with a glint in his eye, that the tactics games of not chasing the break were all part of the game.

"We’ve done a chunk of the work this week, sometimes there’s a few games that get played in races. They had to earn their win and they earned it today," he said.

"It’s bike racing, we’re not fighting wars. It’s only sport. I think the difference now between the sports directors and the teams from 10 or 15 years ago is that we all have a mutual respect for what each other do. It would be crazy not to because, at the end of the day, I’ll be seeing Kim Andersen in 10 days time at another bike race.

"When we win, we are the first people to congratulate our rivals and they do likewise. Cycling is too small a world to have enemies."

The racing rivalry no doubt ended with a few beers in an Adelaide bar on Sunday night.