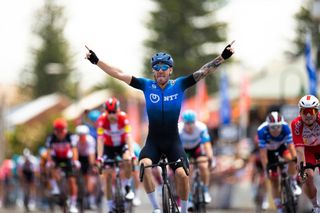 The NTT Pro Cycling riders and staff celebrated Giacomo Nizzolo's sprint victory at the Tour Down Under as much as the Italian himself, the success ending a seven-month spell without a WorldTour victory for the team.

The African team won just seven races in 2019, with Edvald Boasson Hagen's stage at the Critérium du Dauphiné their last in the WorldTour back in June. In recent months, the team has scrambled to score as many points as possible to avoid relegation from the WorldTour, putting survival above success.

They got their chance to taste victory on stage 5 of the Tour Down Under, with Nizzolo in the right place at the right time when other sprint teams fell apart, and he beat Simone Consonni (Cofidis) and a late charge from Sam Bennett (Deceuninck-QuickStep).

NTT Pro Cycling no longer have Mark Cavendish as their lead sprinter but have signed 12 new riders and brought in Bjarne Riis as part-owner and new team manager. Riis spoke at length about his troubled past in cycling and about how he hoped to change NTT Pro Cycling.

Riis was at the finish in Victor Harbor and cracked a rare smile of both team and personal satisfaction.

"This win is important for us. Of course for me personally it's nice too, but for the whole team this is important," Riis said.

"It'll hopefully give us a boost to work harder and keep doing what I want them to do: ride as a team."

Riis' arrival has sparked lots of controversy but also seems to have been a catalyst for an early-season success. Riis may not yet know all the names of the riders at NTT Pro Cycling but he has already inspired them, with an extra team meeting just before Saturday's start focusing minds.

"It was not me being tough but I could feel tension amongst the riders because they weren't happy about how they worked yesterday, so I got them together at the start," Riis revealed.

"I told them that when we leave a meeting room it has be with everything clear and all square. I want to see them smile and then do what we told them to do. They were not quite there at the start, so I told them that when they go out on the road, they keep fighting, as a team. They did that and we won."

Nizzolo back to his best

Nizzolo missed the immediate post-stage celebrations with the NTT Pro Cycling staff and riders because he had his own moment of celebration on the podium.

The former Italian national champion won three sprints in 2019 but has endured a series of injuries that have disrupted his sprinting career. He is now back to his best.

"I finally had a good winter, that was a success for me because I started the season without injury or problems. Things are going good so far, so I'm super happy to win," Nizzolo explained in impeccable English.

"At the team presentation I picked this stage, I thought it could suit me well. Of course, I wasn't sure I'd be able to contest the sprint because of the late climb and attacks I but had a great team around me today. l lost a few seconds on the climb but they waited for me and brought me back to the chase group, and once we were in the final kilometres, they protected me too.

"I'm sure Riis is happy we won. So am I. We put everything out on the road and it worked out. Now we can move forward with confidence and be lifted by this win."