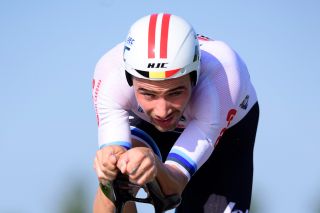 UCI Hour World Record holder Victor Campenaerts is unconcerned about the reputation of the NTT Team's new manager Bjarne Riis, telling Het Laatste Nieuws (HLN) that the Dane's record as a manager is more important than his past involvement with doping.

Riis and his business partners Lars Seier Christensen and Jan Bech Andersen came to an agreement with NTT Team's principal Doug Ryder to purchase a one-third share in the organisation, with the former Tour de France winner moving into the manager role previously held by Ryder. Riis' fellow Danes Lars Michaelsen and Lars Bak joined the organisation this year, with Michaelsen replacing Rolf Aldag as head directeur sportif and Bak moving into one of the DS roles left vacant by the departure of Jean Pierre Heynderickx, who moved to Bora-Hansgrohe.

Speaking to HLN from a training camp in Namibia, Campenaerts said he was assured by Bak that Riis is the best manager around.

"He may not have been the most virtuous in his time – and probably not a majority of the riders around him either," Campenaerts said. "But now I look first at his qualities as manager, and he is one of the best around right now, Lars Bak assured me."

Bak and Campenaerts were teammates at Lotto Soudal in 2018 and talked about Riis then. "It was at a time when I could never have suspected that [Riis] would one day become my team manager. Then you ask those questions easier, about doping," Campenaerts said. Bak, he added, had no negative things to say about Riis.

Riis presided over the CSC and Saxo Bank and Saxo-Tinkoff teams until differences with Oleg Tinkov led to his departure from the WorldTour. During his time as manager, Riis' teams won the 2006 Giro d'Italia with Ivan Basso, who then was caught up in the Operacion Puerto affair and suspended.

He led CSC during Carlos Sastre's Tour de France victory, although the team's main leaders were Frank and Andy Schleck. He was also at the helm when Alberto Contador won the 2011 Giro d'Italia – while controversially riding during his doping case from the 2010 Tour de France [when he was with Astana] – only to have that victory stripped from his palmares when he lost his appeal to CAS. Alberto Contador also won the Vuelta a España in 2012 and 2014 with the team before Tinkov sacked Riis.

But during that time, Riis' doping activities continued to taint his reputation – first when a former soigneur Jeff d'Hont wrote a book about Riis' doping practices that led to the Dane confessing to using EPO, growth hormone and cortisone during his career. Further exposes such as the book by Tyler Hamilton outlined how Riis introduced riders to Eufemiano Fuentes, the doping doctor who led the blood doping ring that was smashed by Operacion Puerto.

Anti-Doping Denmark investigated and found that there were widespread doping practices under Riis at CSC but could not sanction him because of the statute of limitations.

Having a manager who participated in widespread doping schemes in the past doesn't seem to raise alarm bells for Campenaerts, who described Team NTT's medical guidance as "holier than the pope" and says he is 99.999 per cent sure that there are no longer any structured doping systems in pro teams.

"For everything you do wrong, you have the ultimate responsibility nowadays," he said.

"I can't imagine Douglas Ryder taking this lightly during the numerous previous conversations with Riis. If there was any suspicion that his image could be harmful to the team, the deal would never have been reached. If you see what Bjarne achieved as a team manager; the man really knows how to approach things."

Campenaerts is hopeful that Riis, who in his day was one of the best time triallists in the world, can help him improve like his former performance manager at Lotto Soudal did.

"Maybe there's a Kevin De Weert 2.0 in him. I have a very good feeling about this, and look forward to working together."