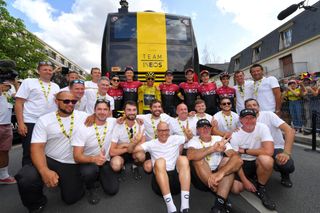 Team Ineos are weeks away from announcing their leaders for the Tour de France in 2020 but, with defending champion Egan Bernal, four-time winner Chris Froome, 2018 winner Geraint Thomas, and new signing Richard Carapaz all in the mix, Dave Brailsford is confident that the team can succeed in their quest for an eighth title in nine years.

Speaking at the 2020 Tour de France route presentation in Paris, Brailsford told Cyclingnews that his next challenge would be to analyse the route in full before coming up with a plan of action.

Both Bernal and Froome have expressed their hopes of leading the team at next year’s race, as Froome seeks a record-equalling fifth title following his serious crash at this year’s Critérium du Dauphiné.

While line-ups and rosters are far from complete, Brailsford at least knows the sort of parcours his team will have to deal with. Gone from this year is the team time trial, while there are just 36km of individual time trialing deposited on the penultimate stage of the race. The fact that all 36km come during a mountain time trial on home favourite Thibaut Pinot’s local roads will not be lost on Brailsford, but he believes Ineos’ strength in depth will be enough when it comes to controlling the race through the medium mountain stages that pepper the entire 2020 Tour de France route.

"I think there’s a reduction in time trials and flats," Brailsford told Cyclingnews in Paris.

"Then the last time trial is interesting but they’ve taken the climbing kilometres and spread them throughout the race rather than have them focused on your Alpine and Pyreenean focus stages, which is interesting. It’s more a mid-mountain, all-rounder route. I don’t think that makes it more difficult to control.

"Every year it’s a different puzzle to solve. We’ll take it away, pick it apart and figure it out. In the team, we’ve got riders who can really climb, who can time trial well and, whichever way a Grand Tour goes, we’ve got guys who can cover all the bases."

With Geraint Thomas hinting that a Giro d’Italia bid could be his main focus, Brailsford will wait until the Italian Grand Tour and then the Vuelta a España announce their routes later in the year before confirming Team Ineos’ plans.

"It’s now a question of sitting down, looking at the Giro, this, then looking at the Vuelta and then deciding who we’re going to tackle the season," he said.