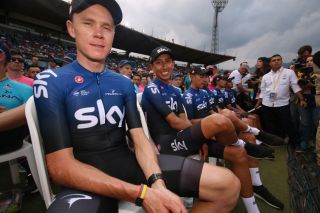 Chris Froome claims Tour de France champion Egan Bernal has told him he would sacrifice the defence of his yellow jersey to help Froome win a fifth Tour title next year.

Bernal, who had originally been set to lead the line for Team Ineos at the Giro d’Italia until injuries of his own altered his schedule, stepped in and won the Tour, with fellow Ineos rider Geraint Thomas, the 2018 champion, finishing second.

Froome, who will have an operation next month to take a metal plate out of his right leg, has begun training again and has voiced his ambition to compete for a record-equalling fifth Tour title in 2020.

In an interview with France Télévisions aired on Sunday, he was asked if 22-year-old Bernal was prepared to support him next July.

"He has said he is," Froome said, before adding: "I need to be the strongest. If he’s the strongest, then I’ll be happy if he wins, because that’s how racing goes – the strongest rider wins."

Froome spent more than three weeks in hospital this summer after crashing at 60km/h while riding ahead of the time trial at the Critérium du Dauphiné in June. He sustained a broken femur as well as fractures to his hip, elbow, sternum and vertebrae.

The 34-year-old underwent extensive rehabilitation and has been increasing his training since getting back on a bike for the first time at the end of August. His recovery, he has said, is progressing quicker than expected, and he is eyeing the Olympic Games road race in Tokyo as well as the Tour in 2020.

As such, the crash does not seem to have been as career-threatening as first feared. Asked by France Télévisions if he’d retired if he won a fifth Tour title, Froome said: "No, no, no. I’m not like that.

"Everyone tells me that I should stop when I’m at the top, but I love cycling and I want to continue. If I can’t win, then I will help someone else who can win. I’ve won four Tours, I’m short of at least one more victory."

Last month, Froome insisted the challenge of coming back from such a serious injury would only add to his motivation.

"A fifth Tour title was a big deal in itself. But going for a fifth title off what was potentially a career-ending crash… that would be even bigger," he said.

"There were loads of people who came out after the crash and said 'He's done. He'll never win another Tour.' They only spur me on."