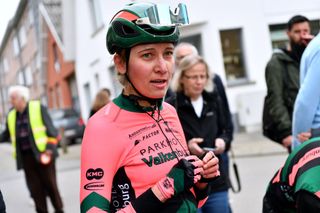 Mitchelton-Scott have announced the signing of Sofie De Vuyst for 2020. The Belgian joins the Australian squad after a season with Parkhotel Valkenburg.

32-year-old De Vuyst has raced for eight teams during her ten-year professional career, starting off at Topsport Vlaanderen and spending five years at Lotto Soudal along the way. This season she took the biggest win of her career at Brabantse Pijl, and also won the mountain classifications at Festival Elsy Jacobs and the Lotto Belgium Tour.

"It's very special to join Mitchelton-Scott, it's one of the biggest teams in the women's peloton. It's quite an honour to ride for this team and it also seems to be a really professional team in every way," said De Vuyst in a team statement.

"I'm looking forward to working with the world's best climber and GC rider, Annemiek Van Vleuten. I see this really as an honour and I will give my everything to help Annemiek as much as possible.

"I want to be an important supporter for Annemiek and Amanda Spratt in the hilly races and I hope to reach the same level as this year, then I think I can be a strong support in the finals of big races. Of course, winning a UCI race myself would be nice as well.

"I like hilly and hard courses, after a hilly race, I've a pretty good sprint. My favourite races are the Tour of Flanders and Omloop het Nieuwsblad because they are around on my training roads, but I also like races such as Liège-Bastogne-Liège and Brabantse Pijl because of their hilly profiles.

Team sports director said that he expects De Vuyst to take a leadership role in some races while working for others elsewhere.

"Sofie is a rider that can fit in well to a lot of different types of races. With her being a Belgian rider she knows a lot of the Classics courses there and with her ability to climb well she can do really well in those harder cobble classics," said Vestby.

"I felt that we needed to strengthen this area in those kind of races, particularly in the hilly Ardennes style races. She will strengthen the team but also give us an extra card to play. Also races like the Giro-Rosa as she can climb well, she is a rider we can use for a lot of different races and in different roles.

"She has been working full time as a teacher this year whilst racing, so hopefully next year being with us and being able to work less and focus more on cycling can help lift her up to another level."

De Vuyst is set to race both the mixed relay and the road race at the upcoming UCI Road World Championships in Yorkshire.