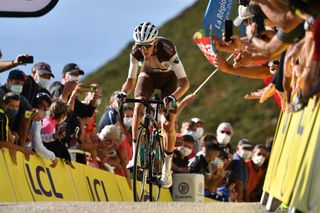 After finishing the stage having dropped from fourth place overall at 30 seconds from race leader Primož Roglič (Jumbo-Visma) down to 11th at three minutes, the AG2R La Mondiale team announced the Frenchman could not continue in the race due to a concussion he suffered in the fall.

"Romain suffers from a concussion, the intensity and signs of which he presented after the stage required our medical team to have him undergo a brain scan at the Clermont Ferrand University Hospital," AG2R team doctor Eric Bouvat said on Friday evening.

"This examination did not reveal any lesions. However, it is necessary for Romain Bardet to stop his sports activities and he will not be able to start the stage tomorrow.

"His date of resuming the competition will be defined according to the progress [of his injury]."

Bardet crashed on the descent from an unclassified climb between the Montée de la Stéle and the Côte de l'Estiade with around 90km to go in the 191.8km stage through his home region. He went down with Nairo Quintana (Arkéa-Samsic) and took a while to get going again.

Bardet's teammate Benoit Cosnefroy, who leads the mountains classification, expressed his deep concern for Bardet in the post-race interview, saying "I was with him when he crashed - actually I wasn't sure he could get back on his bike. He seemed to be in a lot of pain."

Professional cycling has had a spate of head injuries, with a number of high profile riders like Tom Boonen, Chris Horner and Toms Skujins finishing races while clearly impaired by concussions.

Most teams have protocols to prevent riders from continuing on if they have concussions as high levels of effort can compound the injury. It is unclear how Bardet was assessed following his crash.

The Frenchman said in a team press release the incident was exactly the opposite of what he was hoping for.

"This stage on my roads was the exact opposite of what I had hoped for. The fall was violent, downhill, and I struggled all day. The medical tests confirmed what I was sensing and I'm not able to continue on the race. I know that my teammates will give their best to finish the Tour de France with good performances."

Manager Vincent Lavenu said, "We are all sad to see Romain leaving us, at home, on his roads, in a stage where he dreamed of shining. He showed, once again, an admirable courage and fought like a lion until the end of the stage.

"We will fight even harder to honor him, with a polka-dot jersey to defend and stage victories to go after. We wish him to come back even stronger very soon."