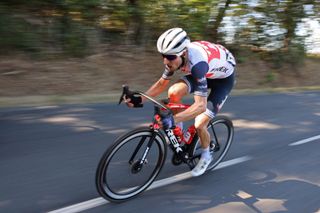 Bauke Mollema (Trek-Segafredo) has been forced out of the Tour de France after a crash with 86km to go on stage 13 of the race. The Dutch rider came down in a large crash that included fellow overall contenders Nairo Quintana (Arkéa-Samsic) and Romain Bardet (AG2R La Mondiale).

"Bauke has sustained a complex fracture of his left wrist: a fracture of the radius and ulnar bones as well as a scaphoid fracture. He is still waiting a CT scan to better understand the situation," said team physician Gaetano Daniele.

"At the Hospital in Clermond Ferrand they have already reduced the fracture of the radius that was causing pressure on the median berve and a lot of pain for Bauke, but now he’s okay and pain-free. We are just waiting to finish the scans and decide what kind of surgery and when, but normally it must be done soon."

Mollema started the stage sitting 13th on GC, 2:31 down on the yellow jersey. The stage to Le Puy Mary saw his teammate and co-leader Richie Porte ride well in the steep finale to move up from 11th to 9th overall, 2:06 down on Primož Roglič.

33-year-old Mollema came into the race after a strong start to racing since action resumed in August. He finished fourth in his defense of his Il Lombardia title, and took top ten results in both the Tour de l'Ain and La Route d'Occitanie.

Both he and Porte lost time in the crosswinds on stage 7 of the Tour, but they were both climbing well in the race ahead of the major mountain stages in the Massif Central and the Alps.