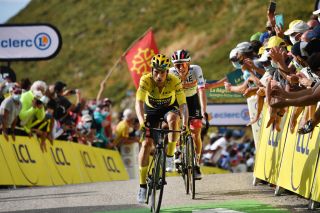 The final climb on stage 13 of the Tour de France may not have been the longest ascent covered so far in this year’s race but the steep haul up to Puy Mary Cantal proved to be decisive nonetheless, with gaps appearing among almost all the GC contenders.

Some of the time deficits proved to be no more than a few seconds, but the gains for the Slovenian duo of Primož Roglič (Jumbo-Visma) and Tadej Pogačar (UAE Team Emirates) rammed home the proof that they are a cut above their rivals.

While Daniel Martínez (EF Pro Cycling) danced his way up the Puy Mary Cantal to take a well-deserved stage win, a battle raged over six minutes further down the climb, as Jumbo-Visma and Team Ineos went head-to-head.

It was the British team who set pace on the penultimate climb of the Col de Néronne, with Guillaume Martin (Cofidis) and Romain Bardet (AG2R La Mondiale) the two biggest victims.

Martin came into the stage sitting third overall, with a rejuvenated Badert just one place behind. The latter crashed with 86km to go in a fall that took Bauke Mollema out of the race, and would go on to lose 1:30 to Roglič and Pogačar.

Martin, however, had an even worse day, losing close to two minutes and leaving his podium chances in tatters. Both French riders also ended the day outside of the top ten on GC with Bardet now in 11th at 3:00 and Martin a place back at 3:14.

When Pogačar put in two massive attacks only Roglič could go with him, as a group containing Porte, Landa and López formed just behind them. Bernal and Urán fought to limit their losses, but at the line the defending champion conceded 38 seconds to the yellow jersey.

The result means that Bernal has now dropped to third overall, 59 seconds down on Roglič with Pogačar now in second place, 44 seconds off the lead. Despite his losses on the climb Urán moved up two places to fourth, while Nairo Quintana holds fifth but has now drifted to 1:12.

López moved up three places to sixth – making the GC two Slovenians followed by four Colombians – and Adam Yates’ finish only clarified that he is riding for a GC result rather than concentrating on stage wins. The British rider is now up to seventh. Landa has risen to eight, 1:55 of the yellow jersey.

Richie Porte’s strong ride has catapulted him into the top ten for the first time in this year's race and he will take much confidence in the way he limited his losses, looking the third strongest of the GC riders. Movistar's Enric Mas now rounds out the top ten after Bardet and Martin both dropped out.

Just outside the top ten, there were notable rides from Dumoulin and Carapaz, who both limited their losses on the final climb despite working for their respective leaders before Pogačar's accelerations. The collective strength from EF Pro Cycling in the day’s break – in which they had three riders – helped them to take the lead from Movistar in the teams’ classification.