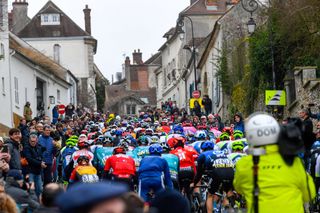 The organisers of Paris-Nice have announced restrictions to public access at the race in the wake of a French government limit on the size of gatherings in the light of the growing coronavirus epidemic.

The French Health Ministry issued a 1,000-person limit on any gathering on Sunday evening as the number of individuals infected with the novel coronavirus SARS-CoV-2 reached 1,126 - up 20 per cent from the previous day.

"In order to comply with the French Ministry of Health's ban on gatherings of more than 1,000 people, the organisers of Paris-Nice have decided together with the government authorities to hold the race 'behind closed doors'," race organiser ASO announced on Monday.

"The organisers of Paris-Nice call upon spectators to observe these new rules even though they stand in contrast to cycling's tradition of bringing riders and fans together."

Last week RCS Sport was forced to cancel or postpone its marquee spring events - Strade Bianche, Milan-San Remo and Tirreno-Adriatico - after the Italian government introduced stringent limitations on movement and public gathering because of the world's second largest outbreak of the coronavirus in northern Italy.

With local authorities saying six people at the UAE Tour were exposed to the virus and several teams were quarantined in Abu Dhabi as a result, five teams withdrew from Paris-Nice: Astana, CCC Team, Mitchelton-Scott, Team Ineos and UAE Team Emirates.

Race organisers decided to allow for an additional rider for each remaining team and new invitations to Circus-Wanty Gobert and B&B Hotels-Vital Concept.

The race got underway as scheduled on Sunday.