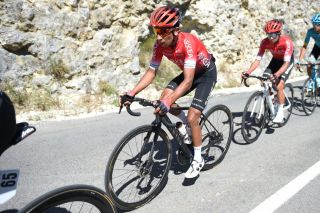 Nairo Quintana became the latest Tour de France contender to be forced out of the Critérium du Dauphiné by injury when he abandoned on the final stage 5 to Megève citing knee pain.

The Arkéa-Samsic rider explained afterwards that he had felt “severe pain” in the same knee that he had injured in a training crash at the start of July, though he added that his decision to abandon had been a precaution ahead of the Tour.

“My legs were fine, but I felt a severe pain in my knee, which had been injured when I was hooked up in training in early July. I preferred to quit on this stage of the Critérium du Dauphiné in view of the Tour de France,” Quintana said in a statement released by his team.

Nairo Quintana: I've been in contact with the best at the Tour de l'Ain

Quintana had begun Sunday’s Dauphiné finale just 21 seconds off the yellow and blue jersey after the abandon of overnight leader Primož Roglič (Jumbo-Visma), but he was surprisingly distanced when the race split on the Col de Romme and Col de la Colombière after a flurry of early attacks.

The Colombian was more than five minutes down on the leaders by the time he abandoned the race ahead of the final ascents of the Côte de Cordon and the Montée de l’Altiport. The Critérium du Dauphiné was eventually won by Quintana’s fellow countryman Daniel Martinez (EF Pro Cycling), who overhauled the French duo of Thibaut Pinot (Groupama-FDJ) and Guillaume Martin (Cofidis) in the overall standings in a breathless finale to the five-day race.

Quintana was struck by a car while training in Motavita, Colombia on July 3 and he spent a little over a week off the bike before he resumed training. The 30-year-old had enjoyed a sparkling start to 2020 after moving from Movistar to Arkéa-Samsic, winning the Tour de la Provence, the Tour des Alpes Maritimes et du Var and the final stage of Paris-Nice, which was the last WorldTour race before the season was interrupted by the COVID-19 pandemic.

After returning to Europe aboard a charter flight from Colombia in late July, Quintana resumed competition at the Mont Ventoux Dénivelé Challenge, where he finished 8th. He proceeded to place third overall at the Tour de l’Ain and had finished consistently in the front group at the Dauphiné before his setback on the final stage.

Quintana was the fifth Tour favourite to abandon the shortened Dauphiné, which took place a week closer to the Grand Départ of the Tour than normal. His fellow countryman Egan Bernal (Team Ineos) abandoned ahead of stage 4, citing back pain, while Steven Kruijswijk (Jumbo-Visma) and Emanuel Buchmann (Bora-Hansgrohe) were forced out after dislocating his shoulder in a crash on the descent of the Col de Plan Bois on Saturday.

Roglič crashed later in the day but he completed the stage to retain his overall lead, only to abandon the Dauphiné ahead of Sunday’s final stage.

L’Équipe reported that Bernal’s back problem had not prevented him from partaking in a training ride in the Alps on Saturday, while Jumbo-Visma manager Richard Plugge expressed confidence that Roglič’s injuries would not prevent him from lining out at the Tour, though he struck a note of caution about Kruijswijk, describing the coming days as “decisive” for his participation.

Bora-Hansgrohe confirmed that Buchmann sustained no fractures in his fall, but directeur sportif Enrico Poitschke said there was “still a big question mark over whether he can start the Tour de France.”

The Tour gets underway in Nice on August 29.