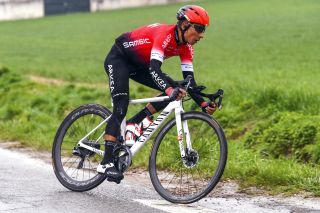 Nairo Quintana has resumed training a little over a week after he was hit by a car while riding on home roads in Colombia.

Arkéa-Samsic had announced that Quintana would have to spend two weeks off the bike after sustaining a knee injury in the crash, which was caused by a close-passing motorist who clipped the rider with his wing mirror. The incident took place in Motavita, Colombia on July 3.

Ciclismo Internacional has reported that Quintana was back in training on Saturday – just eight days after the crash – and the site has published a video recorded by Colombian rider Jose Leonel Díaz that shows him riding in the company of his compatriot and teammate Winner Anacona.

Quintana lashes out at 'conmen' dragging young Colombians to Europe

No fractures for Nairo Quintana after training crash

Despite restrictions on travel to and from Colombia due to the COVID-19 pandemic, Quintana is expected to travel to Europe later this month aboard a charter flight in the company of his fellow Colombian professional riders.

Quintana is due to return to competition at the Tour de l’Ain (August 7-9) and he is also set to ride the Critérium du Dauphiné (August 12-16) before the rescheduled Tour de France gets underway in Nice on August 29.

The 30-year-old delivered a string of fine performances in the early months of the campaign, his first in the colours of Ark­éa-Samsic after joining the French Pro Continental squad from Movistar during the off-season.

Quintana won the Tour de La Provence and the Tour des Alpes Maritimes et du Var, claiming solo victories at Mont Ventoux and the Col d’Éze in the process. He placed 6th overall at Paris-Nice, where he claimed an emphatic victory on the summit finish at La Colmiane on the final day.

Three times a podium finisher at the Tour – he was second overall in 2013 and 2015, and third overall in 2016 – Quintana has marked himself out as one of the favourites for overall victory in 2020. His Arkéa-Samsic team said last week that Quintana was “convinced that this forced rest will in no way affect his preparation for his goal of the year, the Tour de France.”