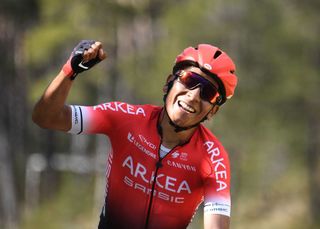 Nairo Quintana (Arkéa-Samsic) escaped serious injury after being struck by a car while training in Motavita, Colombia on Friday.

The municipal Twitter account posted news of the crash, saying that the driver of the car made an 'improper maneuver' and collided with the Tour de France contender.

Quintana was not transferred to a hospital, instead chose to go home and be treated by his personal doctor. His manager Giuseppe Acquadro said the injuries are not serious.

"It seems, and we hope, that it is nothing serious," Acquadro told La Gazzetta dello Sport. "But he took a hit on his left knee and is now in the hospital to do x-rays. He was doing an uphill test and he was at full speed. A car hit him with the mirror and ended up on the ground."

Quintana posted a video on his team's social media Friday afternoon, explaining the incident: "He came up behind me, I couldn't see him or anything, he was on the white line and hit me. I have a small scratch, a blow on my right knee and another blow on my left thigh, which is where I hit the rearview mirror of the vehicle that hit me," Quintana said.

The 30-year-old winner of the 2014 Giro d'Italia and 2017 Vuelta a España had a sparkling start to the 2020 season before the COVID-19 pandemic halted all the races.

He is expected to lead Arkéa-Samsic at the Tour de France, traveling to Europe on July 19 on a special charter flight with other top Colombian pros including 2019 Tour champion Egan Bernal.