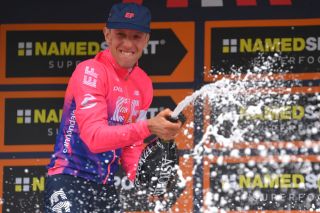 Israel Start-Up Nation have announced the signing of Michael Woods from EF Pro Cycling for 2021. The Canadian climber is the latest major name to join the team and will form part of Chris Froome's support squad at next year's Tour de France.

Woods has spent five years in the EF/Slipstream setup since turning pro back in 2016, winning a Vuelta a España stage and Milano-Torino along the way. Alongside Dan Martin, he will be a team leader for the Ardennes and Italian Classics at Israel Start-Up Nation.

"I have had five great years with Slipstream Sports, which made making the decision to leave their program difficult," said Woods in a team press release. "However, when it comes down to it, Paulo [Saldanha] and Sylvan [Adams] have believed in me from day one, and I am very excited to reciprocate that belief and be a part of ISN in 2021."

Woods on recovery from broken leg: I'm almost 100 per cent

"With Chris Froome and several other great signings, I believe that ISN has the potential not just to win the Tour de France next year, but also be present and winning throughout the entire WorldTour calendar.

"For me, the prospect of riding for the best GC rider of this generation at the Tour is very exciting.  Also, with Dan Martin already on board, I really see us being able to have a winning combination in the Ardennes and Italian classics."

The move to ISN is a reunion for the 33-year-old Canadian, as team performance manager Paulo Saldanha mentored Woods as he fought to turn pro back in 2013, later coaching him, while team co-owner Sylvan Adams has also worked with Woods in the past.

"Paulo and Sylvan are the reason that I am a pro cyclist today," said Woods. "I first met Paulo in 2013, and he immediately took me under his wing. He pushed me to quit my jobs (working as a bank teller and at a bike shop), and he told me I had the ability to be a pro.

"Because of my age [27 at the time], I was too old to qualify for government grants or get a place on a development team. It was difficult for me to justify leaving my job. However, Paulo connected me with Sylvan, and the two of them invested in me when nobody else would.  Through their support and belief, I managed to rise through the cycling ranks and make it to the highest level of the sport."

Woods, who this summer has worked his way back from a broken femur suffered at Paris-Nice, is the latest signing for ISN during the transfer window. He follows Froome, Daryl Impey (Mitchelton-Scott), Carl Frederik Hagen (Lotto Soudal) and Patrick Bevin (CCC Team) in moving to the Israeli team.

Team co-owner Adams said that Woods would be an important super-domestique for Froome, noting that he would also get a free role to lead the team in certain races, too.

"It gives me particular pleasure to welcome Mike Woods to ISN," Adams said. "I've known him since before he turned pro, and I’ve watched his development as a rider, becoming one of the world's elite.

"He will be an indispensable super-domestique to Chris Froome's Tour de France bids beginning next year and will have an equally important role as our team leader in classics and monuments. Welcome to ISN Woodsy, I'm excited about our future!"