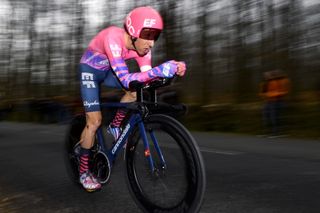 EF Pro Cycling's Michael Woods crashed out of Paris-Nice in March, breaking his femur and, in doing so, severely jeopardised his chances of riding the Tour de France, the Olympic Games and the World Championships. However, his recovery has coincided almost exactly with the coronavirus lockdown in Spain, and both the Tour and the Olympics were subsequently postponed, leaving the Canadian motivated for when the racing season restarts.

"It was, like, 'OK, yeah, the Olympics might not happen for me,' but then, 'Wait a second, the Olympics aren't happening this year,'" Woods said on his team's website this week of the fact that the Tokyo Games have been put back to summer 2021.

"Or the Grand Tours – everything's been delayed – and then the first day I'm allowed to ride outside is the first day that the Spanish government lets us ride outside after the lockdown was over," he said, realising that although breaking his leg has been a huge setback, if it did have to happen, it happened at about the 'perfect' time.

"It’s been really weird," Woods admitted. "It's crazy the luck that I've had and the misfortune that I've had at the same time. Breaking your femur is not a lucky thing, obviously. It's rough, it hurts, and it was probably the most painful thing I've ever gone through – just immediately thinking of the Olympics, thinking of the Tour, and those things just completely being jeopardised.

"It hurt to think that all those big dreams and goals that I had were now gone. That was probably the lowest moment in this whole injury period. But then going from that to ending up in the hospital and seeing nurses and doctors with masks everywhere, and realising how insignificant my injury was relative to what was going on really put things in perspective," Woods said of the COVID-19 pandemic.

Regarding his recovery, Woods explained: "I'm almost 100 per cent. I can't run yet, but I can do everything else. I can walk around with my daughter, and I can ride my bike. It's as if there's nothing; I feel completely normal on the bike again, so I'm really happy with the progress I've made.

"Basically, I see this as if it was late October, early November, and I'm doing the Tour Down Under in January," he said. "I'm sitting on the bike and I have the same sensations, and the same weight."

Woods explained that there is some power discrepancy between his left leg and right leg "but it's pretty close to being equal now".

"I know I can always get fit in two months," he added. "I'm a responder. I'm a responder in good ways and bad ways. I can be the worst athlete ever if I take time off, and then I can be one of the best riders in the world if you give me a two-month runway of hard work."

'I could easily have seen it go another way'

A lot of that hard work since March has come courtesy of a physiotherapist based close to Woods' home in Girona, Spain, he said.

"I was really lucky to get some help from a physio named Richard Spink," said Woods. "He's come by my house five to six times per week throughout the process. Those first few weeks he really worked on bending me in ways that were just awfully uncomfortable, and focused on increasing my range of motion each day.

"Some of these sessions were brutal, but it made a huge difference. He got me to a place where I could get my knee over the bike two weeks after getting injured. Being able to get on the bike was huge, and hugely increased my rate of healing. I was moving all of a sudden, and it also really helped my mental health, because I could actually do something, as opposed to just sitting on the couch.

"I could easily have seen it go another way, which could easily have happened under quarantine," Woods admitted. "But the team doctors were great in terms of getting Rich a note that got him approval from the government to come see me, and Rich was kind enough to take that risk. If I didn't have that access, I could easily have been sitting around and stiffened up, and then I don't think I would have been able to get my leg over a bike for months."

It remains to be seen whether the two months from now until the start of the rescheduled Tour de France, set for August 29-September 20, will be enough for Woods to fully recover to start in Nice, but speaking in April, a month into his recovery, Woods said that he was motivated to try to be back at 100 per cent for both the Worlds road race (September 27) and next year's Olympics.

The 33-year-old said that he was also happy to have been able to use the time away from competition and while convalescing to spend time with his family at home in Girona, too.