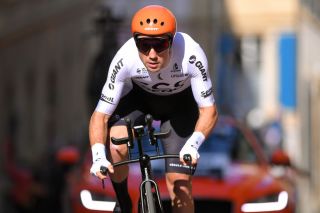 Patrick Bevin is the latest rider to join Chris Froome at Israel Start-Up Nation for 2021. The experienced all-rounder joins from the CCC Team on a two-year contract.

“The team is ambitious. There is a desire to grow and contest the world's biggest races, and that ambition is alluring. This progressive attitude, coupled with a focus on team culture, creates an incredibly positive environment and I knew it was something I wanted to be part of. I believe I have more to give the sport, and I believe ISN is the place to harness that desire,” Bevin said in a press release issued by the team.

Bevin has established himself as a strong individual time trialist in recent years and he finished a creditable fourth in the time trial at the World Championships last September. He has been part of the CCC Team for the last two years, and before that rode for BMC Racing and Slipstream Sports. The 29-year-old game close to signing with Mitchelton-Scott two years ago before committing to CCC and he came within a whisker of winning the Tour Down Under in 2019.

Israel Start-Up Nation are building a Tour de France team around Froome and see Bevin as a vital part of their future squad. He can ride on the flat, can be used in a team time trial formation and has the ability to ride on the front during the medium mountain stages. It’s in the time trial where Bevin’s natural ability is most evident.

“I love the discipline and everything that goes with it. I have an internal drive to improve and race against the clock; and I want to get the best out of myself in time trials wearing the ISN colors," said Bevin, who also highlighted his versatility.

"I always want to be an asset to the team on the road. With an ever-expanding program and the goals that come with it, my range of abilities will allow me to contribute to putting ISN in the spotlight as much as possible."

Israel Start-Up Nation have already announced the signings of Carl Fredrik Hagen and Daryl Impey in the last week and their continued activity on the transfer market also comes after Nils Politt decided to leave the team for Bora-Hansgrohe.

“In the last few years, Patrick has shown that he has great potential to perform both in short stage races and TTs. We believe he will be an important piece in building the support structure around Chris, and at the same time, he'll also get his own chances in other races. We believe he will also prove valuable in races where he hasn’t previously had the opportunity to go for results,” said manager Kjell Carlström.

On the Monday, Israel Start-Up Nation also announced the signing of Sebastian Berwick from Australian squad St George Continental Cycling Team. The 20-year-old finished second overall at the Jayco Herald Sun Tour and second in the Australian national U23 road race earlier in the year.

“That super start to 2020 with the second-place finish in the U23 nationals and the Herald Sun Tour – that’s where I showed everyone what I could do on big climbs,” said Berwick.

"I am keen to develop and learn from the best, most experienced riders in the bunch. I will take every opportunity to help our leaders in the mountain stages, and in any other chance I get. I see the efforts ISN is putting into becoming one of the best teams in the world (especially for stage races) and it was a pretty clear choice for me to make."